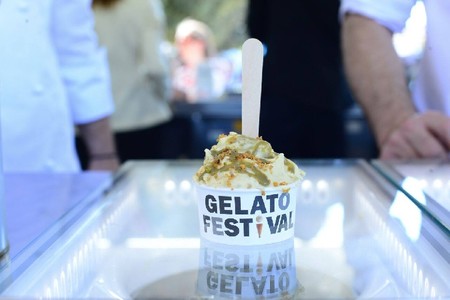 For month after month, the Gelato Artisans have been practising their craft, refining their recipes and putting the finishing touches to their amazing gelato creations in anticipation of winning one of two prestigious awards at the Gelato Festival in London, giving them a coverted place in the grand final in Florance, Italy in September 2017.

Finally on Sunday 18th June 2017, after a glorious weekend in London where crowds of people mingled  to taste some of the worlds most delicious gelato, the two winners of the London stage were annouced after the scores from the Techical Jury and the public vote were combined.

And the winners were:

With a special mention from the Technical Jury to Joel Large of East Coast Gelato, Norfolk for “Bakewell Tart” and Taseer of Fabulous Ice Fires, London for “Snow Leopard Songline: MadagascanVanilla with  Himalayan Salt Caramel  Stracciatella”

And finally, the IFI Tonda Challenge, a competition in which the Gelato Artisans were asked to scoop a portion of gelato as close to the reccomended 60g portion as possible, was awarded to Joel Large of East Coast Gelato, Norfolk

After a fantastic weekend in London, with perfect sunny days and two London winners, the Gelato Festival 2017 now moves onto Varsavia in Poland for the next stage at Plac przy Torwarze - 23-25 June 2017 http://www.gelatofestival.it/en#tappe

The Gelato Festival can count on the support of a number of sponsors and partners. These include a strategic partnership both with Sigep and Carpigiani Group.  Eni is the Global Partner of the european tour.

For more information www.gelatofestival.co.uk has all the details and latest news, or see @GelatoLondon on twitter or search for “Gelato Festival” on Facebook & Instagram for further information.