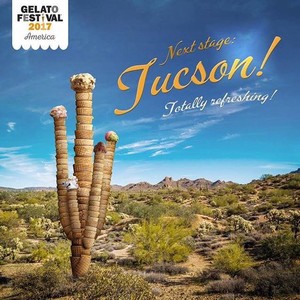 Deciding the competition results was the combined vote of the jury of food journalists and that of the general public. Each category accounted for 50% of the vote. The awards were announced at La Encantada at the close of the second stage of the Gelato Festival America.

There were several side competitions at the festival that really got the crowd going. For the fourth time in Gelato Festival history, ten kids from the Tucson area grilled the artisans on their motivations and methods of preparation, then tasted and voted on the best flavor. Kid’s Jury Award went to Ezequiel Gomez of Gelato Gourmet, Weston, FL, for the flavor Il Siciliano, a delicious combination of the most amazing ingredients from Sicily. Il Siciliano is a creamy pistachio gelato with toasted almonds and a refreshing touch of lemon, topped with caramelized orange zest.

Another entertaining competition was Stack It High, presented by PreGel America where artisans had 20 seconds to stack as many scoops onto a cup as possible. Cheffe Pamela Wolfert of The Inn Spot, Hampton Bay, NY.  Speed cup, a competition presented by ISA, allowed the artisans to show off their speed and accuracy in producing cups of gelato. The winner was Giulia Gori of Vivoli, Florence, Italy.

And finally, Carpigiani Gelato University and PreGel America sponsored an award for the Best Gelato Storyteller!  Each artisan was approached with little or no warning and asked about their flavor.  Their ability to describe the flavor and their enthusiasm for gelato were captured on a live Facebook video, which was judged by the Gelato Festival Publicity Team.  And the winner was Giulia Gori of Vivoli, Florence Italy, describing her flavor Florentine Affogato Tiramisù: Old Fashioned Tiramisu made with Florentine Custard cream recipe & traditional lady finger cookies dipped in Italian Espresso Café. All topped off with an irresistible Caramel Coffee Crunch!

People from all over Arizona enjoyed the educational presentation in the Gelato Classroom. There were presentations from Carpigiani Gelato University, Whygelato.com teaching the history of gelato, Sogno Toscano's gastronomic gelato show, Speed Cup by Isa, phenomenal participation of kids to the Kids Jury, and a gelato eating contest! Recent students from Carpigiani’s Gelato University created fresh Berry Sorbetto and Coconut flavors that the public loved.

Stay tuned for the 2018 Gelato Festival America Tour, which will be coming to 12 cities across the United States, beginning in June.