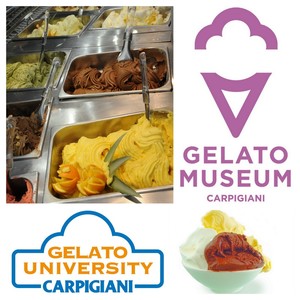 As the world’s leading manufacturer of gelato machines, for years Carpigiani has actively worked to promote artisanal gelato culture throughout the world, organizing and sponsoring an increasing number of cultural activities.

To start with, the Gelato World Tour. Started in May 2013, this international event will pass through eight cities in five continents, three of which (Rome, Valencia, and Melbourne) have already been conquered. These cities welcomed a total of 340,000 people, shedding light on local and artisanal high-quality products. More than 17,000 kg of gelato were served in 245,000 cups and 160,000 mini cones. There are great expectations for the next stop in Dubai, on 13-15 February 2014. In the shadow of the Bury Khalifa, the tallest skyscraper on the planet, the 16 best gelato artisans of the Middle East will battle it out, the public tasting their gelato and voting for their favorite, while also having the chance to participate in gelato lessons, training workshops, and delicious games and contests. The top three artisans will earn a spot in the Grand Finale in Rimini (5-7 September 2014) where they will fight for the title of “World’s Best Gelato.” Dubai will be followed by Austin (11-13 April 2014), Shanghai (30 May – 1 June 2014), and Berlin (22-24 August 2014).


Do you want to know more? Come see the press conference “Gelato World Tour: Halfway Mark,” scheduled on Sunday, 19 January 2014 at 11:00 am in the Ravezzi 2 Room (Sigep, Rimini Fiera). Follow competition developments in real time at the new website www.gelatoworldtour.com, where visitors will find pictures and videos of the stops so far.

New courses and programs at Carpigiani Gelato University. During the five days of Sigep, 15 internationally renowned instructors will hold 41 free mini gelato seminars open to all visitors. The instructors will demonstrate all the sweet creations that are possible thanks to Carpigiani machines. Inaugurated in September 2013, the new training program “Become a Gelatiere” has registered a record number of enrolments. Students increasingly choose to complete the full four-week program instead of just doing a part.

The revolutionary course “Gelato Smartfood” has also been a great success. It was held for the first time on 18-19 November 2013 thanks to the intuition of Donna Brown and the collaboration with IEO (European Oncology Institute). The course supplies the basic knowledge of how to develop gelato with specific “healthy” characteristics. The recipes are rigorously certified SmartFood and focus particular attention on the nutritional value of ingredients and preparation techniques. This makes it possible for operators to offer consumers a healthy alternative from a nutritional point of view, and at the same time maintain a strong bond with traditional cuisine. The course features recipes conceived by Donna Brown together with Gianpaolo Valli, senior instructor at Carpigiani Gelato University. The lessons are taught by Valli and Lucilla Titta, a nutritionist from the European Oncology Institute Foundation. The next courses are scheduled for 23-24 January 2014 (English) and 17-18 February 2014 (Italian).


March 2014 will see the start of “Gelato Week Retail Pioneers.” The Gelato Pioneers project, which debuted in 2011 to support those who want to open a gelato shop outside of Italy, has returned, this time to stay. The course lasts five days, is open to all (even those who are new to the gelato trade), and, thanks to the work done during the week, qualifies some participants to win special prizes and a Gelato Pioneers scholarship.

While in Dubai for the Gelato World Tour, Carpigiani Gelato University will renew its academic collaboration with ICCA, the International Centre for Culinary Arts in Dubai. Three beginner courses have been scheduled for 24-28 March, 26-30 May, and 21-15 July. Luciano Ferrari will teach students from the Middle East, Africa, and India how to make high-quality gelato. ICCA, considered one of the top 10 cooking schools in the world, and Carpigiani Gelato University, the most prestigious artisanal gelato school, unite to promote gelato culture and train successful gelato professionals. An Open Day open to the public will inaugurate the new season, featuring free lessons throughout the day from another instructor from Gelato University, Alice Vignoli.

The Carpigiani Gelato Museum (www.gelatomuseum.com) will also be present at Sigep, together with Carpigiani Gelato University. The museum will present the video “The History of Gelato in Four Minutes.” How far has this sweet food traveled? Visitors can explore the delicious world of gelato, learning about facts, ancient recipes, exotic places, and adventures that cross centuries of history. Who will pass the test, answering all the questions correctly? The Gelato Museum is an experience that must be enjoyed, even in video! And for those who want to spend more than four minutes learning about gelato history, during Sigep 2014 the museum will have extended opening hours with the possibility of enjoying a guided tour without first making reservations. The museum will be open on Saturday, 18 January from 2:00 pm to 6:00 pm and Monday, 20 January to Wednesday, 22 January from 9:30 am to 6:00 pm (guided tours every 30 minutes). For more information: info@fondazionecarpigiani.it, 051 6505306.


Carpigiani is the sponsor of the sixth edition of the Gelato World Cup, supplying the competitors with the most advanced Maestro HCD 2 Star batch freezers. The challenge is for gelato, chocolate, and culinary professionals from across the globe, offering a unique opportunity to compete and match skills in each area. This edition will include 12 teams from around the world (Argentina, Australia, Brazil, Canada, Germany, France, Italy, Morocco, Mexico, Poland, Spain, USA), competing to make the best artisanal gelato creation. May the best team win!

The Bruto and Poerio Carpigiani Foundation also supports the second European Artisanal Gelato Day and continues to promote gelato culture, representing the best of artisanal excellence and creativity. There is still time to participate in the “Gelato Pixel Passion” photography competition, offering prizes of three scholarships for Carpigiani Gelato University courses (one for two weeks, one for one week, and the other for two days). The competition is for students and those who have graduated from university within the past 24 months, aged between 18 and 35 years, anywhere in the world. Participation is simple and free, just take a picture that illustrates your vision of gelato and the emotions it inspires and send it to info@fondazionecarpigiani.it by 1 September 2014. Rules are available at www.fondazionecarpigiani.it.

At Sigep, the Bruto and Poerio Carpigiani Foundation is also pleased to present “The Art of Gelato 2014,” the first annual international visual arts competition for children and young adults (7-21 years old) organized with Together in Arts Foundation. The objective of this new contest is to encourage youth to discover and express their creativity, communicating through visual arts. The subject of the competition is gelato, because gelato itself is a creative work that is universally appreciated and inspirational. The winners of the competition’s first phase will see their work published in the book and DVD “The Art of Gelato,” distributed in Italy, Canada, and the USA. The winners of the second phase will be displayed at “The Art of Gelato” exhibition at Rimini during Sigep 2015. There are various prizes, including a week-long trip in Italy to visit the most important museums in Rome, Florence, Milan, and Venice. For more information: www.togetherinarts.org/contest and www.fondazionecarpigiani.it.