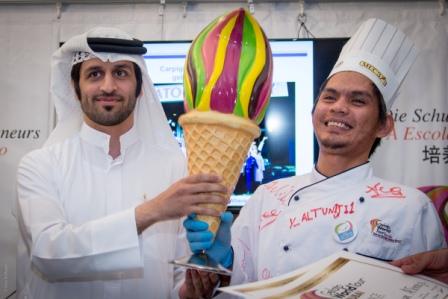 After Rome, Valencia and Melbourne, DUBAI has been declared the Gelato Capital of the World:
10% of the proceeds will be donated to the “Dubai Cares”

The eyes of food lovers across the world were on Dubai over the last three days, as the Emirate became the ‘Capital of Gelato’. The Gelato World Tour – organised by Carpigiani Gelato University and Sigep-Rimini Fiera, in collaboration with IFI and MEC3 and in association with Franchise Middle East and DESITA, as well as media partner SAHARA Communications – brought the culture of fresh and high-quality artisanal food to Dubai for the first time. The event garnered media attention from all around the world, from the Middle East to Italy and as far afield as Brazil and the USA, spoke about this event. We would also like to take this opportunity and thank our partners, co-partners, organizers and sponsors who have made this a successful event.

More than 40,000 people attended the 4th stage of the Gelato World Tour in Dubai, February 13th-15th. The gelato artisans produced about 4,500 kg of gelato stored in 13 refrigerated IFI latest generation displays. Medac offered 35,000 cups and Altimates donated 70,000 mini-cones. 3,200 litres of milk and cream and 800 kg of sugar were required to produce the gelato. The high quality of the flavours was guaranteed by the use of 1,000 Kg of MEC3 ingredients, everything the artisans needed: bases, high quality pastes, variegate toppings, nuts, and decorations. MEC3 offered tastings of all their specialties: Cookies & Co., Quella®, Quell’altra©, Cremini, and obviously 2013’s hit flavour Hello Kitty. 10 giant cone trophies made of fiberglass and resin plus an enormous camel were supplied by Screams, the leading manufacturer of gelato shop displays, booths, and accessories.

Crowds packed all the gelato classes organised by the Carpigiani Gelato University and especially the “Gourmet Gelato” Presentation by Chef Marco J.Morara of ICCA, that produced an amazing gazpacho gelato.

In light of the success of the third stage of the Gelato World Tour in Dubai, Carpigiani will be adding several courses in the Middle East, starting from March 2014 (see www.iccadubai.ae for details)! The courses will discuss gelato, ingredients, and production and will include lots of hands-on practice. As was evident during the competition, the Middle East offers great opportunities for those who want to open a gelato shop. After Dubai, the next Gelato Capital in Middle East could be Amman (Jordan).