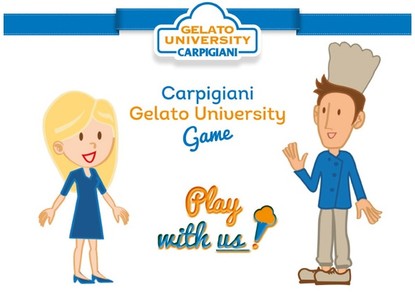 The interactive game, available in English and Italian on www.gelatouniversity.com, will test aspiring gelato artisans' knowledge of the world of gelato

Anzola Emilia, 25 August 2015 – Can you tell the difference between gelato and ice cream? And what the characteristics of a successful gelato shop are? Carpigiani Gelato University has launched the first online game that lets future gelato artisans test their knowledge of the world of gelato.
Playing is simple: you access the game on www.gelatouniversity.com, select one of the available languages – as of now English and Italian – and, following the instructions given by assistant Vanilla and her gelato Master, solve the proposed cards.
The key points of the game are the different aspects of successful gelato entrepreneurs’ business: from the knowledge of the product, to the choice of the best location where to open a gelato shop, up to the basic features of a gelato workshop.
At the end of the game, you will receive an e-mail with the score recap, showing your level of preparation. The document also lists the correct and wrong answers, so that you can learn from your mistakes.
Carpigiani Gelato University’s online game spreads the culture of artisan gelato to the worldwide public in an innovative and fun way, revealing not only the tasty secrets of a healthy product characterized by genuine and fresh ingredients, but also a few tricks of the culinary art that is part of the Made in Italy heritage.
Carpigiani Gelato University, established in 2003 as the educational division of Carpigiani, is today recognized internationally as a breeding ground for successful gelato entrepreneurs. Its mission is to lay the basis for a worldwide gelato culture. This year, the School has organized more than 400 courses in 10 languages for a total of 12.000 hours of lecture, data nearly tripled in three years. The School’s headquarters are located in Anzola dell’Emilia (Bologna) and, outside of Italy, training also takes place in 11 foreign branches.
For more information: www.gelatouniversity.com
other News