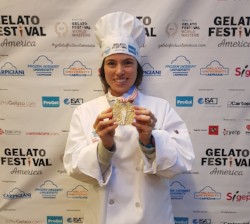 Monday, September 10, 2018 -- Gelato Festival America, now in its second year, celebrated the first ever Washington DC edition this weekend at City Market at O. The mission of Gelato Festival America is to spread the culture of artisan Italian gelato throughout the United States by visiting seven cities this summer. The winner of the contest for best flavor at the Festival was Trinacrium, presented by Maria Liliani Biondo from uGOgelato in Miami, Florida. One competitor was from Washington DC: Alisa Dan of Pitango Gelato.

- As the 1st place winner of the Washington DC festival, Meria Liliani Biondo received from Carpigiani a medal by Florentine goldsmith Paolo Penko. Most importantly, Trinacrium and Maria Liliani Biondo will be competing in the North American Semi-Finals in 2019for a chance to be one of three to represent America at the Gelato Festival World Masters in 2021 in Italy. The Trinacrium flavor brought bold flavors from its volcanic island namesake into a singular but strong flavor shape of three points. Maria selected a trio of main ingredients, including nuts and fruits: pistachio from Bronte and almonds from Avola with a finish of oranges from Riviera as a "variegato". The flavor was a hit with the Public Jury composed of ticket-holding guests and the Technical Jury, composed of a professional panel of fifteen judges.


In addition, two “special mentions” were awarded by the Public and Technical Juries:

- Technical Jury: Nocciola Chocake by Fabio Pilo of Zerogradi Gelateria in Ambler, Pennyslvania. The Technical Jury prize is awarded to the professional judging panel’s favorite flavor (with no consideration given to the popular vote by all ticket-holding guests). Each gelato is judged based on presentation, flavor, structure and creativity. This award was presented by ISA, the festival’s sponsor that provides the display cases for all the stages.
- Popular Jury: Butter Pecan by Thomas Marinucci of Marinucci’s Gelato & Pastry in Fairfax, Virginia. The Popular Jury prize is awarded to the flavor that was preferred by the general admission guests (not counting the professional judging panel). PreGel presented this award.

Winners of the other prizes:

- The Gela-to-go Award: Trinacrium by Maria Lilianna Biondo of uGOgelato in Miami, Florida. The recipient of the Gela-to-go Special Mention Certificate was the chef who sold the most gelato.

- Kids Jury: Blue Majik by Sierra Georgia of GELAT’OH Brick and Motor in Philidelphia, Pennsylvania earned the Kids Jury Special Mention certificate. Little jurors, both pre-selected and among the little guests of the Festival, tasted all the flavors in the competition and selected their favorite.

- Speed Cup Race by ISA: Sierra Georgia of GELAT’OH Brick and Motor. Sponsored by ISA, Speed Cup Race is about speed and the art of using the spatula to fill cups in the traditional Italian way. Each Gelato chef has 30 seconds to serve as many perfect servings of Gelato as possible. Sierra Georgia was able to serve the most perfect cups, followed by Alisa Dan of Piango Gelato from Washington DC and then Maria Liliana Biondo of uGOgelato in Miami, Florida. These three chefs each received a trophy to commemorate their place.

- Best Video: The best video made was by Alisa Dan of Pitango Gelato in Washington DC, who received a Special Mention certificate.

It is the culmination of a fantastic first stop in Washington DC, where thousands of people enjoyed authentic Italian gelato and voted for their favorites. Guests enjoyed demonstrations, contests and games, ceremonies and most importantly, tasting the artisanal gelato. In order to build a cultural bridge between Italian gelato and American Ice Cream, one special guest was invited to show case her skills in preparing the traditional American frozen desert: Burnt Caramel and Pear with Walnuts by Susan Soorenko of Morenko’s Ice Bream in Silver Spring, Maryland.