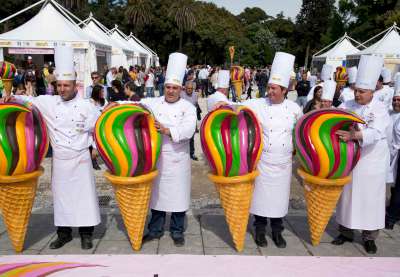 ROME REMAINS GELATO CAPITAL OF THE WORLD: PRODUCTION DOUBLED DUE TO LONG LINES AT THE STANDS (MORE THAN 100 KG OF GELATO WERE PRODUCED EACH DAY BY EACH OF THE 16 COMPETING ARTISANS). NEXT STOP: VALENCIA (5TH-7TH JULY 2013), FOLLOWED BY CHICAGO (30TH AUGUST-2ND SEPTEMBER 2013), DUBAI, SHANGHAI, SAO PAULO, SYDNEY, AND BERLIN.

10% OF PROCEEDS WILL BE DONATED TO BAMBINO GESU? CHILDREN?S HOSPITAL TOWARDS THE RENOVATION OF THE HEART SURGERY INTENSIVE CARE UNIT.

Our gelato chefs produced about 5,700 kg of gelato, which was served from in the 19 refrigerated displays of IFI. Every display was from the newest and most innovative line of IFI products. Medac offered 95,000 cups and Cono Roma gave 30 thousand mini-cones of gelato to the children from the schools of Rome and the province. The Centrale del Latte of Roma supplied  the gelato chefs with 3,400 litres of milk, necessary to produce the gelato. Italia Zuccheri supplied the sugar and over 600 kg were used. The high quality of the Gelato World Tour flavours was guaranteed by the use of 1,200 kg of MEC3 ingredients, which supplied the gelato chefs with everything they needed: bases, high quality pastes (such as pistachio and hazelnut), mixers, toppings, nuts and decorations. The MEC3 staff helped us enjoy all of their specialties, in particular Cookies&Co., Quella®, Quell’altra© and i Cremini, and last but not least, the flavour trend of 2013: Hello Kitty. 100 giant cone awards made of fibreglass and resin were supplied by Screams, the leading company in the production of gelato shop displays, booths and accessories.

The winners have earned the right to compete at the Gelato World Tour Grand Finale at Rimini, September 2014! Here are the final standings, which sum the votes of the public (weighted 50%) and those of the technical jury (weighted 50%).

The Gelato World Tour 2013-2014 will continue until 11:00 pm tonight at the Pincian Terrace. Organized by Carpigiani Gelato University and Sigep (along with principal partners IFI and MEC3, technical partner Cono Roma), and with the support of the Foreign Ministry, the Department of Culture and Rome Historical Center Policy, and the Masters of Italian Gelato. The mission? Spread throughout the world the culture of this fresh, high-quality food that represents the excellence and creativity of thousands of gelato artisans.

Rome remains gelato capital of the world, doubling production due to the long lines (more than 100 kg of gelato were produced every day by each of the 16 competing artisans). Next stop: Valencia (5th -7th July 2013) followed by Chicago (30th August – 2nd September 2013), Dubai, Sao Paulo, Sydney, Shanghai, and Berlin.

40 gelato artisans will compete at the Grand Finali in Rimini in September 2014, battling for the title of World’s Best Gelato Artisan.

As far as the IFI’s Tonda Challenge is concerned, the winner is MARIA ANNUNZIATA CARBE’ (Pasticceria Gelateria 2000, Ellera Umbra, Perugia), who made two “perfect” cups weighing 60 and 62 grams.