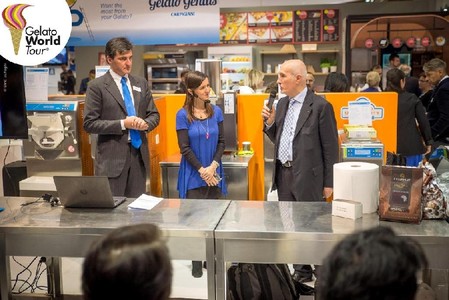 Rimini, 21 January 2017 - Gelato World Tour, the "Formula One of Gelato," is reaching the end of its second edition after the successful stage in Chicago on May 2016 and the Challenges in Italy, China and Illinois that involved more than 1,000 gelato artisans in just one year. In preparation for the World Finals to be held in Rimini on the wonderful seafront beloved by Federico Fellini on 8-10 September, Sigep 2017 will be the setting for the next steps that will lead to the selection of the 40 global finalists who will compete for the title of "World's Best Gelato." On January 22nd, we will see the announcement of the eight gelato artisans selected during the Gelato World Tour German Challenge, organized in collaboration with Uniteis during Sigep (Tiglio Room - Pav. A6). They will participate in the German Finals to be held 7-9 July in Berlin in the iconic Potsdamer Platz, symbol of the reconstruction after the fall of the wall, redeveloped by leading international architects.
Rules and registration form are available at www.gelatoworldtour.com and for more information contact info@gelatoworldtour.com

With 42 stages in 2016 and another 20 planned in 2017, the Gelato World Tour Italian Challenge is winding its way through the Italian peninsula to identify the Italian gelato artisans who will compete in the Italian Finals scheduled for 23-24 March 2017 in Anzola Emilia, Bologna at the Carpigiani Gelato University campus. The two days of competition are expected to attract around 120 competitors who will compete for the 8 positions reserved for Italy in the World Finals.
The Italian Challenge is organized by Carpigiani, in partnership with its network of dealers and SIGEP – Italian Exhibition Group, and Punto IT magazine. Technical sponsor is lactose-free milk Zymil (Parmalat).
Participating is easy: just contact the local Carpigiani dealer and sign up to compete with one's best flavor. On the day of the competition, artisans prepare their flavors in the production space made available to them by the organization, and then in the late afternoon the jury starts tasting them. 20 more stages are scheduled for 2017 and the calendar is available on www.gelatoworldtour.com
For information: info@gelatoworldtour.com

Gelato World Tour conquers Europe! After receiving hundreds of requests from artisans eager to test their skills and win the title of “World’s Best Gelato”, here are four competitions already planned and many more to come. Here is the schedule:

Colombian Challenge
Selections are to be held in Bogotá in April. More details soon.

North American Challenge
Selections will be held in US in May and June. More details soon.

Gelato World Tour is supported by the Italian Ministry of Foreign Affairs and Economic Development and by the Emilia Romagna Region. It is the first traveling international competition focused on identifying the best flavors in the world. It has already made stops in 11 cities in the world: Rome, Valencia, Melbourne, Dubai, Austin, Berlin, Rimini, Singapore, Tokyo, Chicago, and Shenzhen. It is organized by the prestigious Carpigiani Gelato University, the most famous school for the successful gelato chefs and Sigep - Italian Exhibition Group, for 38 years the most important fair in the gelato and traditional pastry trade.  Main partners: IFI, global leader in the production of gelato display cases, and PreGel, the world's largest producer of products and ingredients for gelato and pastry.