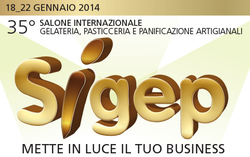 Innovation, digitalization, culture, international communication: these are the watchwords for Carpigiani at the 35th edition of SIGEP, the most important exhibition dedicated to the artisanal gelato and pastry trades.

This year, in an area covering more than 700 square meters, seven “artisanal production areas” will be equipped with the latest technology and a wide selection of machines made by the company headquartered in Anzola Emilia (Bologna). It will also be possible to learn more about gelato from fifteen instructors from Carpigiani Gelato University, the school that the international press has decreed to be the most prestigious gelato school in the world. The instructors will present more than 200 mini seminars. The public will learn more about the new four-week training program called “Become a Gelato Artisan,” the new “Gelato Smartfood” course (developed in collaboration with the European Institute of Oncology and Donna Brown), and the new “Gelato Week Retail Pioneers,” an evolution of the “Gelato Pioneers” scholarship project scheduled for March 2014.

It will be a world premiere for five innovations carrying the Carpigiani name: IdeaTre, Labotronic HE, Maestro HE, Labo XPL P, and XVL 3 Self Service. IdeaTre is a machine that will revolutionize the retail food world, perfectly encapsulating production, storage, and presentation of artisanal gelato, pastry, and gastronomy specialties. Labotronic HE and Maestro HE are new Carpigiani batch freezers, equipped with increased production speed, flexibility, and energy savings. Labo XPL P is a very simple batch freezer to manage thanks to some new structural features. XVL Self Service is the perfect machine for self-service gelato shops, a business that has been trending in recent years.

On Sunday, 19 January 2014, at 2:00 pm at the Carpigiani stand at Sigep (Pavilion C7 Stand 127, West Entrance), Carpigiani’s most futuristic digital project will be presented (official invitation attached). Thanks to the MyGelato app, all gelato lovers will be able to easily find the nearest gelato shops and, more importantly, to send gelato gifts to loved ones with a simple click. Using the MyGelatoShop digital platform, gelato artisans can create an app for their own shops and communicate directly with their customers (current and potential) about the latest flavors, activities, and promotions.

The international artisanal gelato competition that is conquering the planet has hit the halfway mark. Organized by Carpigiani Gelato University and Sigep-Rimini Fiera (with main sponsors IFI and MEC3), the Gelato World Tour has seen more than 340,000 people at its first three stops (Rome, Valencia, and Melbourne), who tasted and voted for their favorite flavors, followed gelato seminars and training workshops, and participated in delicious games and competitions. 17,700 kg of gelato produced, more than 800 news articles in five continents. There are great expectations for the next leg, scheduled for 13-15 February in Dubai, in the shadow of the Burj Khalifa, the world’s tallest skyscraper. And then on to Austin, Texas in the USA, Shanghai in China, Berlin in Germany . . . and finally in September 2014 the Grand Finale in Rimini, Italy. All journalists are invited to participate at the “Gelato World Tour: Halfway Mark” press conference scheduled for 19 January at 11:00 am in the Ravezzi 2 Room at Sigep (official invitation attached).

At Sigep also the Gelato Museum Carpigiani (www.gelatomuseum.com) will be present and, in the Carpigiani Gelato University area, will show the video “A taste of gelato history”. How much has gelato changed over the years, from its origins to today? Find out together with the main character of our new video. Experience the delicious world of gelato, its tasty facts, ancient recipes, exotic places and adventures that cross through centuries of history. Can you pass all the tests, answering all the questions about our favorite food? The Gelato Museum is an experience that must be savored, even through video. And for those who want to lose themselves even more in this story, during Sigep 2014 days, there will be special openings with the possibility of visiting the Museum without any booking. The Gelato Museum is waiting for you on Saturday 18th of January from 2.00 pm to 6.00 pm and from Monday 20th to Wednesday 22nd from 9.30 am to 6.00 pm (guided tours every 30 minutes). For more information: info@fondazionecarpigiani.it, +39 051 6505306.


Carpigiani is also proud to be sponsor of the sixth edition of the Gelato World Cup, offering participating gelato artisans its top selection Maestro HCD 2 Star batch freezers for use during the competition. Twelve teams from across the globe will compete to make the best artisanal gelato creation of all time.


Lastly, the Bruto and Poerio Carpigiani Foundation enthusiastically supports the 2nd European Artisanal Gelato Day (24 March 2014) and two delicious artistic projects: the “Gelato Pixel Passion” photography contest and “The Art of Gelato 2014,” the first annual international visual arts competition for children and young adults organized by Together in Arts Foundation. The objective of this new contest is to encourage youth to discover and express their creativity, communicating through visual arts.