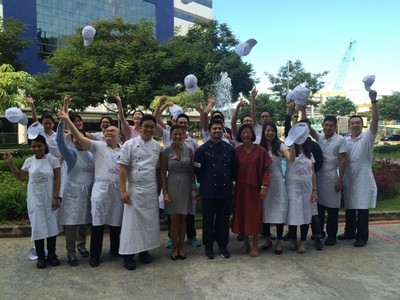 Singapore, 24 July 2015 – Following the trailblazing success of the first ever Asian tour of the highly successful Gelato World Tour 2.0 which was held in Singapore in March 2015, the cool and smooth Italian treat is now a subject of learning and instruction here in this island republic, representing also the rest of the Asia Pacific region.

An announcement was made leading up to the Gelato World Tour 2.0 where At-Sunrice GlobalChef Academy was set to collaborate with the Carpigiani Gelato University to be the first hub of learning on gelato-making in Singapore and the Asia Pacific region.

The Basic Gelato Course programme is designed to meet the aspirations of future gelato entrepreneurs who have no prior knowledge or experience in gelato-making. The main thrusts of learning include basic theoretical and practical sessions which form the basic foundation necessary in producing quality gelato in the authentic age-old respected Italian style. The class is conducted on the campus of At-Sunrice GlobalChef Academy with qualified instructors of the Carpigiani Gelato University.

A total of 19 students from Singapore and the Asia Pacific region, including Malaysia, Indonesia, Laos and China, formed the first batch of students when class began intensively on July 20th 2015. The students underwent a total of 40 hours of learning and practical lessons over five days.

To preserve the desired quality of the learning environment and to ensure that optimal attention be given to each and every student, the enrolment size of the class is capped at 20 students for the first programme and 15 students for subsequent programmes. The fee for the Basic Gelato Course is priced at € 1,000 (approximately equivalent to SG$1,515). Upon graduation, each student will receive a voucher worth the same amount as the course fee. Students are entitled to utilise the voucher as part of payment should they decide to purchase gelato machines from Carpigiani.

Gelato is more than a typical dessert. Though its luxurious creaminess may intuitively suggest otherwise, gelato is freshly made every day in a way that means it is significantly lower in calories and sugar than conventional ice creams. It is high in proteins, calcium and vitamin B2 and contains around half the fat of typical industrial ice creams, which is the reason why gelato is fast becoming the choice dessert for health conscious food-lovers.

Valentina Righi, PR & Communication Manager Carpigiani Group said, “Singapore has an excellent reputation in the creative culinary experience along with other pursuits such as healthy lifestyle, artistic culture and the keen interest in acquiring high quality locally-sourced food ingredients in the culinary scene. All these factors make Singapore the perfect choice to be the hub of learning in gelato-making for the rest of the region. We are elated to partner with At-Sunrice GlobalChef Academy which is known to cultivate sterling global chefs and F&B professionals in a rich and fulfilling learning environment.”

Mr Aloysius Michael, Deputy Chief Executive with At-Sunrice GlobalChef Academy said, “With the Carpigiani Gelato University as our partner, we hope to produce a positive impact on the F&B scene in Singapore and the region. The programme enables restaurateurs, chefs, entrepreneurs and career switchers to acquire gelato-making skills to increase their product offerings or explore new business opportunities."

All students from the first batch of class graduated today at a graduation ceremony held on the campus of At-Sunrice GlobalChef Academy in the afternoon. At the moment, enrolment for the next Basic Gelato Course will take place from October 12th to 16th 2015 is almost fully subscribed. The third Basic Gelato Course is planned for November 16th to 20th 2015.


For more information on the Basic Gelato Course, please refer to www.gelatouniversity.com/en/

Released by The Rainmaker Marketing Group for Carpigiani Gelato University