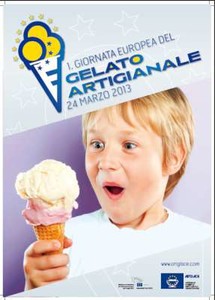 Thousands of gelato shops across Europe are busily preparing for the first ?European Day of Artisan Gelato? on 24 March 2013, as instituted by the European Parliament in Strasburg on 5 July 2012 when it was voted for by 387 delegates. This positive result was reached thanks to the determination of Artglace (the federation of European gelato artisan associations) and cooperation with the whole gelato supply chain which, for this initiative, worked together as a team, confirming the truth of ?united we stand.?

“Everybody wanted to take the opportunity to promote one of the world’s most loved products, artisan gelato,” says the president of Artglace Ferdinando Buonocore. “Besides producing the flavor ‘European Fantasy’ (milk flavor gelato variegated with dark chocolate and praline almonds, 1 cup for 1 euro on Sunday, March 24) in thousands of shops across five continents, throughout Europe there will be numerous initiatives, both in the local shops and in collaboration with institutions, universities, cultural associations, sport associations, volunteer organizations, foundations, and schools of all levels. In addition to the nine countries who belong to Artglace (Austria, Belgium, France, Germany, Italy, Holland, Portugal, Czech Republic, and Spain), celebrations will also be held in Argentina, Canada, India, United States, Greece, Poland, Great Britain, and Hungary. Notwithstanding troubled economic times, gelato artisans continue to represent the best of Europe: the Europe that invests, produces, and works.”

“All the events organized and the work carried out for the first European Artisan Gelato Day have given life to a wide-scale, structured project that outlines a new frontier for our business, where it is not considered just a cost but rather something of value,” concludes Buonocore.

See the rise of artisan gelato in Italy! From the north to the south numerous events have been organized. For a complete list and the names of the participating shops, see https://www.facebook.com/EuropeanGelatoDay?fref=ts.

The objective is to clearly communicate to consumers the values of artisan gelato: it constitutes a full meal, recommended by eminent dieticians and nutritionists. Among fresh dairy products, gelato is an excellent, safe food that underlines the value of local products from each region that hosts artisan gelato shops. In the European Community, the business contributes positively to employment, especially for youth, giving jobs to 300,000 people in approximately 50,000 shops. Taken as a whole, the sector has sales of about four billion euro.

“The planned celebrations for European Artisan Gelato Day are exceeding our most optimistic expectations,” says Luciana Polliotti, journalist and gelato historian, curator of the Carpigiani Gelato Museum. “It is a great chance to engage in long-lasting relationships with institutions like universities, regional governments, municipal governments and artists, where a special postmark dedicated to artisan gelato will be employed. These are just a few examples. This is the beginning of a new era that will finally shine a light on our gelato and our gelato artisans as they strive for excellence.”

Fausto Bortolot, vice president of Artglace and Longarone Fiere, is also satisfied as he is following the celebrations in the Italian province of Belluno and in Germany, where UNITEIS (the association of Italian gelato artisans who work in that country) has been involving more than 1,000 gelato shops in its plans. “I hope that Artglace’s efforts can become a true asset for the artisan gelato business and that all the participants will focus on making the celebrations a success. It is a formidable opportunity for promoting our business.”


For more information: contact Valentina Righi at +39 342 618 3372, write to info@fondazionecarpigiani.it, visit the website www.artglace.com, Facebook page EuropeanGelatoDay and Twitter GelatoDayEurope. European Artisan Gelato Day will be celebrated on social networks worldwide, with numerous fans and comments from all five continents.