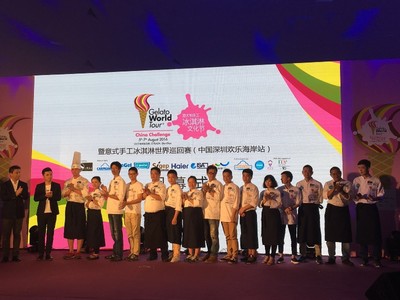 Shenzhen, August 7th, 2016 – Gelato World Tour China Challenge served 60,000 cups of artisan gelato in OCT Harbour O’Plaza - Shenzhen over the last three days. Thousands visited the China Challenge of the “Formula One of Gelato” to taste the best flavors of gelato in China. All the proceeds from the Gelato Ticket sales will go to China Children and Teenagers'Fund , in order to support poor children in the country


Fifteen flavors competed at the challenge in Shenzhen. Fifteen teams came together this weekend in Shenzhen to prepare for the Best Gelato ever. A panel of expert judges (40%) combined with the public vote (60%) decided the outcome of the competition. Two flavours will move on to compete in Rimini, Italy with winners from the other stages for the title “World’s Best Gelato Flavor.”
The artisans produced the gelato onsite in the Carpigiani Laboratory, the biggest ever created in China, thanks to the support of the Organizer of the event, Nina Shanghai Food and thanks to the other partners, first of all Sigep-Rimini Fiera and PreGel who supplied the finest selection of ingredients. The gelato was displayed inside ISA/Haier cabinets. Thousands of visitors witnessed “The Jury Challenge” where each team presented its signature flavor to the Technical Jury, composed of gelato experts as Antonino Sammarco, Head of the Italian Consular Section in Canton, Gary Jones, foreign correspondent in China and judge at the Grand Finale of the Gelato World Tour in Rimini (Italy) in 2014 and Yin Chunying, General Manager of JStyle, under the supervision of Valentina Righi, PR Officer of the Bruto and Poerio Carpigiani Foundation and Stefano Marinucci, Director PreGel.

Another cool competition took place in these days during the Italian Culture Gelato Festival. The winner of the “Stack it High Showdown” by PreGel has been won by the Gelato Chef Liu Bao from Shenzhen City, China who produced an amazing stack of 11 scoops in 30 seconds.

The Gelato World Tour, the world's premiere cross-cultural artisanal gelato competition, set a new record. There have been long lines at the OCT Harbour O’Plaza Shenzhen: Chinese people love gelato. Everybody wanted to taste the 15 flavours vying for the World’s Best Gelato title, and everyone also wants to vote for their favourite one. The workshops organized by Carpigiani Gelato University, Sigep – Rimini Expo and PreGel were fully booked. Each demonstration was tailored to teach people how to make artisan gelato and how to open a successful gelato shop.

“At the Gelato Museum in Bologna Italy, you can trace the history of gelato back 14.000 years ago in Mesopotamia – said Achille Sassoli, Director of the Gelato World Tour -. But China is there as well with the Book of Odes that can be dated around the 7th century BC. It is a volume of poems, songs, and stories about the seasons and life collected over a period of 500 years. The work includes references to “snow wells,” reservoirs for storing snow or ice located in the northwestern highlands of Ch’in, today known as Shensi. The ice was used by Lords to cool their drinks during the summer months. For example, in the poem “Chao-hun” (“Recollections of the Soul”), dating back to the 3rd century BC, we read: “Wine like jade, flavored with honey, fills the winged cups; ice liquor, filtered of every impurity, clear wine, cold, refreshing. the gelato renascence started in Florence with Cosimo Ruggeri and Caterina de Medici in the 16th century and today Italy is for several reasons the most advanced country in the world for artisan
gelato. This is why Gelato World Tour, an event with a clear mission: to spread the culture of gelato, a fresh, artisan food product, to the general public throughout the world, has started in Rome in 2013. We are proud that Shenzhen has been the very first China’s Capital of gelato”.

Thousands of visitors watched the artisans while they were working in the Gelato Lab and creating amazing sensory-shocking flavours. Adults and children wanted to taste the bud-tingling flavours. In this free cultural event, which was open to the public, 15 gelato artisan teams from all over China told their stories and presented their unique flavours to the public and to a jury of experts and journalists. The votes have been combined to award the best gelato flavour in China. Each Gelato Ticket cost 60RMB and allowedfor 6 tastings.

Media credentials, photography, b-roll and more information are available upon request.
other News