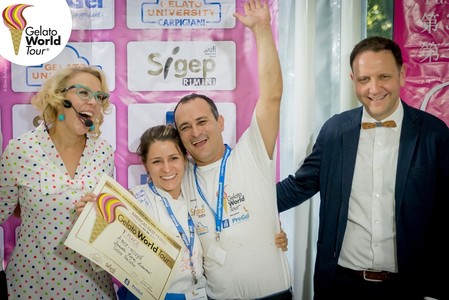 Chicago, 31 May 2016 – Gelato World Tour served 9,000 pounds of artisan gelato in Millennium Park over Memorial Day Weekend. Thousands visited the Chicago Stage to taste the best flavors of gelato in the Americas, being served over 78,000 cups and mini-cones.

Sixteen teams came together this weekend in Chicago to compete for the title of “World's Best Gelato – Americas East.” A panel of expert culinary judges (30%) combined with the public vote (65%) and the opinion of the artisans competing in the event (5%) decided the outcome of the competition. The four winners will move on to compete in Rimini, Italy with winners from the other stages for the title “World’s Best Gelato Flavor.”
The artisans produced the gelato onsite in the Carpigiani Laboratory, the biggest ever created in North America, thanks to the support of Sigep-Rimini Fiera. The gelatos were displayed in the award winning IFI cabinets and were produced using the finest selection of PreGel ingredients.

Other competitions included the “Tonda Challenge” by IFI and the “Stack it High Showdown” by PreGel.  All artisans tested themselves in a battle to the last scoop, using all their ability to prepare the perfect gelato cup of 100 grams (3.5 oz). With two amazing scores of 96 grams and 101 grams, Daniela Lince Ledesma of Dolce Gelato, Antioquia – Colombia, won the Tonda Challenge and the Golden Gelato Spatula, symbol of artisan gelato mastery. There was a tie in the “Stack it High Showdown”. Linda Mercurio, Mercurio’s, Pittsburgh, Pennsylvania and Loris Carlo de Prato, Leonardo’s Gelateria, Barre, Vermont each produced an amazing stack of 8 scoops in 20 seconds.

The Gelato World Tour, which is supported by the Italian Ministry of Foreign Affairs and of Economic Development, as well as the Regione Emilia Romagna, is the first international traveling competition in search of the best flavors in the world. Gelato World Tour has visited nine Gelato Capitals – Rome, Valencia, Melbourne, Dubai, Austin, Berlin, Rimini, Singapore and Tokyo. The Tour is directed by Carpigiani Gelato University, the world’s most renowned school for successful gelato entrepreneurs, and Sigep – Rimini Fiera, the world’s premier artisan gelato tradeshow. Two important partners make this event possible: IFI, international leader in the manufacturing of display cases for gelaterias, and PreGel America, the world’s largest producer of ingredients for gelato, pastry and coffee shops.
“Sixteen artisan teams have delighted Chicago with their wonderful gelato creations. They were all unique, sumptuous and surprised even the most discerning palates. We are delighted with the choice of the public and the Technical Jury. We wish the top four flavors who will represent the Americas region at the Grand Finale of the Gelato World Tour in Rimini, Italy in 2017, all the best,” said Achille Sassoli, Director of the Gelato World Tour. He added, “Chicago’s excellence and creativity in the world of pastry, healthy lifestyle and artistic culture delivered on its promise as the perfect city for our tenth world stage. We are extremely grateful for the warm welcome received and to the many visitors who embraced the delight of gelato and stayed to enjoy the fun-filled three days!”