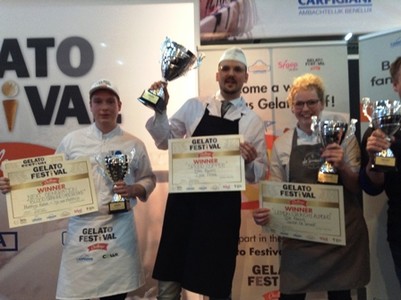 • "Spiced Coffee" by Kees Baars from Ijsie Prima in Callantsoog, Netherlands & "Lemon crunchy almond" by Ilse Kennis from Issalon De Smaak in Reusel, Netherlands have been selected among the competing flavors by a jury composed of experts and journalists.
• The gelato artisan goes on to the next step of the Gelato Festival World Masters 2021, the world championship in search of the best gelato flavors in the 5 continents.

Gorinchem, 5 March 2018 – Gelato Festival Challenge continues its journey around the world making a stop in Gorinchem on March 5th where 26 Dutch gelato artisans took part in the sweetest competition of the year hosted by Carpigiani Benelux during this year’s Bakkersvak tradeshow. The winning flavors are:
“Spiced Coffee” by Kees Baars from Ijsie Prima in Callantsoog, Netherlands. An ode to the artisanal Coffees of the Middle East that are flavored with cardamom rounded out with delicious white chocolat;  “Lemon crunchy almond” by Ilse Kennis from Issalon De Smaak in Reusel, Netherlands. A flavor combining the citrusy lemon with the savory cruch of almond nuts.


The selected gelato artisan goes on to the European Finals of Gelato Festival scheduled for 2020 in Italy at the Carpigiani Gelato University headquarters. Flavor, structure, creativity and presentation are the four parameters used for the evaluation, highlighting the choice of ingredients, the craftsmanship in elaborating the recipe and the visual impact of the gelato (see below the full list of participants).

The jury also awarded the “Next Generation” prize to the best gelato artisan under 30, which went to Matthijs Bollen from Ijs van Matthijs in Wassenaar, Netherlands with the flavor “Blood Orange Cheesecake”. The young artisan will participate in the Next Generation Finale to be held in Florence in 2019, where the best gelato artisan under 30 will be selected to take part in the 2021 World Finale of the Gelato Festival World Masters.

The jury was composed of:
Bob Frie, a Gelato Maestro whom holds the prestigious title of “SVH-Meesterijsbereider” one of not the highest title given out only to the most exemplary Dutch Gelato Maestros;
Aldo de Marco, currently the director of the Gelateria Ijssalon Venezia, Aldo is also a very active member of the Dutch Gelato community, formerly a board member of the ITAL group and taught at the Ijscentrum Gelato School;
Jan Boeren, a noted specialist in plating and desserts is an exam coordinator at the Cuisine Culinaire Nederland Culinary School;
Marcel Moerbeek, Chairman of the Cuisine Culinaire Nederland Culinary School;
Jacques Vos, the Manager of the IJscentrum-Kennis, the Dutch Gelato School.


With the 2018 edition, Gelato Festival  - with Carpigiani and Sigep – Italian Exhibition Group as strategic partners - reaches its ninth year of activity, having made its debut in Florence in 2010 inspired by the idea of the first gelato recipe by the versatile architect Bernardo Buontalenti in 1559. Since then the event has expanded its borders first in the rest of Italy, then in Europe and - from 2017 - also in the United States, with a total of 64 festivals made, before embracing the whole planet with the world championship of Gelato Festival World Masters 2021.