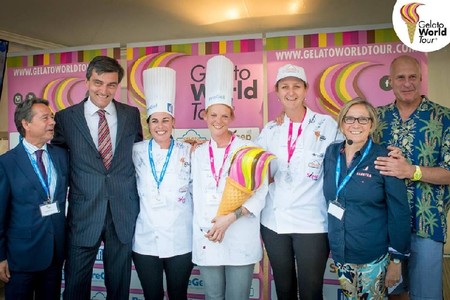 4 GELATO ARTISANS TO FLY TO RIMINI FOR THE WORLD FINALS
7.000 kg of gelato consumed and 50,000 visitors in 3 days in Potsdamer Platz

Berlin, 10 July 2017 – Thanks to the tastiest competition travelling around the world, Berlin has gone crazy over artisanal gelato. More than 50,000 visitors crowded the Gelato World Tour village in Potsdamer Platz, Berlin, this past weekend, from 7 July to 9 July 2017.

Visitors queued up waiting to taste and choose their favourite flavours, establishing a new record: 7000 kilos of gelato in 3 days! The public’s enthusiasm for gelato was enormous and over 80% of the visitors who bought the tasting ticket made their voice heard by voting and contributing to the victory of the 4 gelato artisans who will continue to the World Finals scheduled from 8 to 10th September in Rimini, Italy.

The jury, a team of 8 experts from Germany, was struck by the exceptional quality of the flavours and the perfect combination of ingredients of all the 16 unusual creations in competition. Deciding on the winners was extremely difficult, and ultimately there were two surprises:

-          The winners of the first place are a trio of female gelato artisans from Austria;

-          There were four winning flavours instead of three! In addition to the first three winners, another flavour received such a high number of public‘s votes that the technical jury, after a special consultation, decided to designate a fourth winner.

The public’s vote combined with the technical jury have proclaimed the four winners of Gelato World Tour Germany:

These are the flavours that will represent Germany in the World Finals taking place in Rimini, September 8-10, 2017, vying for the title of „World’s Best Gelato“.

The special mention Technical jury went to Luca Rizzardini of Ice Center Rizzardini in Laufen, Bavaria, with the flavour “Xochiquetzal” and Angelika Kaswalder of Cuore di Vetro in Berlin with the flavour “Black Star”. Both artisans were awarded for the innovative and exceptional use of the ingredients.

The most popular flavour among the public, which has obtained the majority of the visitors‘ votes, is “Kiepenkerl” by Rütter Manuel & Perenzin Aurora of Eiscafè Arcobaleno in Stadtlohn (North Rhine – Westphalia). In fact, the two artisans won the 4th place, which allowed them to be selected for the World Finals. The second flavour awarded by the public was “Green Smoothies” by Giuseppe Cimino of Eisoase Rimini in Plittersorf-Rastatt (Baden-Württemberg).

The 16 finalists have tasted and evaluated all the flavours to award to best one among them all: "Limone Stravagante" by Davide Arnoldo & Stefania Fattor of Eiscafe Cortina in Saarburg (Rhineland-Palatinate).

Simultaneously with the main competition, the Gelato World Tour Village hosted a series of contests in which the candidates faced each other in entertaining challenges for the public.

The winner of the IFI Tonda Challenge, a game where the artisans had to make a perfect 60-gram cup first with one flavour and then with two, is Fabrizio Musco of Adriano in Munich. The second IFI competition was the Guerrilla Gelato Challenge for which the participants had to make a creative video. The work with the most likes on Facebook was the one by Katarina Rankovic of Eismanufaktur Kolibrì in Wolfurt (Austria).

Aurora Perenzin of Arcobalen in Stadtlohn has made the highest gelato cone with 24 scoops in 30 seconds and has been awarded the PreGel Challenge prize.

Visitors of all ages took part in live demos dedicated to artisan gelato and its history. All the events taking place at the Carpigiani Gelato University stand were sold out!

The backdrop of the Grand Finale, scheduled from 8 to 10 September, will be Piazzale Fellini, in Rimini, in front of the most popular beach in Europe and near the Grand Hotel – which has become famous thanks to the shooting of the movie Amarcord by Italian director Federico Fellini – where the best gelato artisans from four continents (Europe, the Americas, Oceania and Asia) will vie for the title of “World’s Best Gelato”.

Today, Germany is the country with the second highest number of gelato shops (around 9,000), but with the biggest passion.

The link between Italy and Germany is very close in this field and it can be said that it is thanks to the Italian gelato artisans who emigrated to Germany in the 19th and early 20th centuries that it was possible to develop the art and tradition of artisan gelato also in the German regions.

The Gelato World Tour, which is supported by the Italian Ministry of Foreign Affairs and of Economic Development, as well as the Regione Emilia Romagna, is the first international traveling competition in search of the best flavors in the world. The Tour is directed by Carpigiani Gelato University, the world’s most renowned school for successful gelato entrepreneurs, and Sigep – Italian Exhibition Group, for thirty-eight years the world’s premier trade show for traditional gelato and pastry (next edition from 20 to 24 January, 2018, Rimini). Main Partners are IFI, leading manufacturer of gelato display cases, and PreGel, the world’s largest producer of ingredients for gelato and pastry. Additional partner is MEDAC (since 1960 the world leader in producing paper cups for gelato and for hot and cold beverages).

The Uniteis News association’s magazine is the media partner of the event.