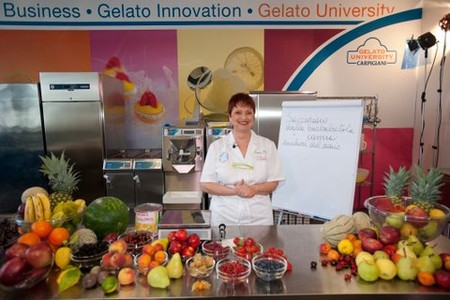 
Welcome to the world of Italian artisanal gelato!

Today, we celebrate the birth of the first-ever video course series in the world on gelato making. The series pays tribute to the Great Gelato Maestro of the 21st century via innovative film tutorials. The project, produced by Carpigiani Gelato University, is launched by Donata Panciera, whose international fame does not require any additional presentation.

The "Maestri del Gelato" series come entirely in digital format so that all gelato entrepreneurs (experts and potential) have access to the tecniques of making the best gelato with professional machineries directly from home or from their laboratory. The series aims to provide guidance in facing the challenges in an increasingly competitive market today.

In the first two video courses of the seires, Milk-based Gelato and Sorbet and Fruit-Flavoured Gelato, Donata Panciera will guide you on the best raw materials for creating the white base, the yellow base (followed by tasty flavours such as hazelnuts, pistachio and vanilla). She will also teach you the best way to organize your laboratory and your production process, as well as how to balance the recipes of strawberry, lemon and banana sorbets. Being a video course, you can immediately visualize and apply into practice the precious suggestions as many times as you like, adding also a touch of your own creative input.

Have a good lesson and a great gelato... and see you at the next film course!