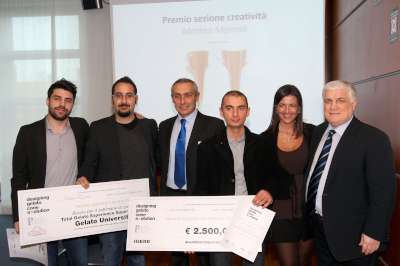 THE CONES OF TOMORROW? THEY DON?T DRIP AND THEY?RE EASY TO SET DOWN, ALLOWING FOR SLOWER EATING. TOM DIXON AND BABBI HAVE DECIDED THE WINNERS OF THE INNOVATIVE COMPETITION ORGANIZED BY THE BRUTO AND POERIO CARPIGIANI FOUNDATION TO DEVELOP THE CONE OF THE FUTURE.

The winners of the Designing Gelato Cone Evolution competition have been announced. During the ceremony attended by local authorities and international journalists Valentina Righi, vice president of the Bruto and Poerio Carpigiani Foundation, revealed the designers of the two projects that won the scholarships offered by Carpigiani Gelato University and Babbi for the design of the cone of the future: Matteo Memmi and Marco Forbicioni (Creativity section) and Enrico Ippoliti (Industrial Feasibility section).

“Designing Gelato Cone Evolution, judged by the London designer Tom Dixon and Babbi, has reached its ambitious objective of creating a stronger link between the design world and the gelato world,” explains Andrea Cocchi, CEO of Carpigiani Group and co-sponsor of the competition. “For the 110th anniversary of the cone first designed by Vittorio Marchioni (1903), many young designers offered ideas for an innovative gelato container that combines practicality and esthetics, without calling into question the original form.”


“We decided to work on the dripping aspect which we figured was the cone’s main problem since otherwise it is conceptually perfect,” say Marco Forbicioni and Matteo Memmi of Santa Design Studio, winners of the Creativity section. “We found a way to divert drips inside the cone, to avoid getting hands and clothes dirty while eating and making the cone delicious to the last bite.”


“Our basic objective was to make the cone similar to other forms that are found in bars and restaurants, from glasses to coffee cups,” explains Simone Mosé Boffi, who worked with Enrico Ippoliti on the project that won the Industrial Feasibility section. “We wanted to make it ‘placeable.’ And then we developed the idea further and worked on designing an interesting, tapered line that gave importance both to the object and its contents.”


For the Industrial Feasibility section, the cone manufacturer Babbi awarded a scholarship worth €2,500.


“We plan on proceeding with the development of this project, and my compliments to all those who participated,” says Gianni Babbi, president of Babbi. “Unfortunately, due to the limits of physics it is not possible to develop all the projects into real products, but we were truly honored to see so much interest from designers in this business.”