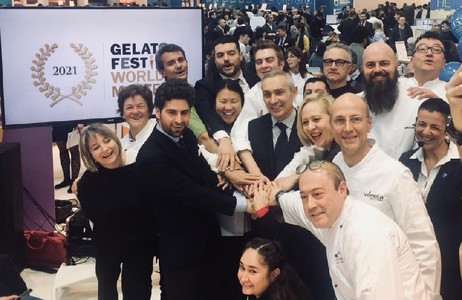 The global championship among 5.000 professionals from all over the world is presented at Sigep: a 4 years qualification path begins in April, then the final challenge among the best 36 chefs. Here the complete program of Gelato Festival '18

The challenge for the best artisan gelato makers on the planet, a journey with hundreds of tests over four years on five continents, with technical and popular juries , in order to win the title of world champion. Today at Sigep in Rimini, it starts the Gelato Festival World Masters 2021, the main international category tournament with Carpigiani and Sigep - Italian Exhibition Group as partners. The festival is a strategic development project for the positioning of artisanal gelato and the entire supply chain, with the aim of involving in the challenge 5,000 gelato chefs from around the world and generating a 15% increase in the sector, with a global media value estimated at 50 million euros.

"The Gelato Festival World Masters - explains Gabriele Poli, founder of the Gelato Festival - are in line with a growth path developed first in Italy, then in Europe and finally in America. It represents a great opportunity for the entire sector: in the next four years the event aims to stimulate the evolution of artisan gelato, from the strategy of positioning on emerging markets to repositioning in the consumer's perception on mature markets. The strategy towards consumers concerns both the semantic and gustatory part (the transition from an ice cream maker to a master gelato maker, and from classic tastes to gastronomic gelato, with a focus on nutritional values) and in spreading through the world the culture of artisan gelato with its unique characteristics".

"We are pleased to launch Gelato Festival World Masters 2021 - adds Andrea Cocchi, CEO of Carpigiani Group - directly from our booth at Sigep 2018. This partnership and its worldwide developments, on markets that we consider strategic, confirm our desire to provide the best possible support to all gelato makers, the first spokespersons of a product that is conquering the world of food with its craftsmanship and creativity ".

"Italian Exhibition Group, the company born from the integration between Rimini Fiera and Vicenza Fair - concludes Patrizia Cecchi, Italian show director of Italian Exhibition Group - confirms its total commitment to support Gelato Festival. With a great goal: to spread the artisan gelato culture, one of the symbols of the made in Italy food, to internationalize its business. And we all, today here in Rimini for SIGEP, the leading trade fair in the sector, we must feel proud ambassadors of this task. The world tour is for all of us the weaving of determining relationships. SIGEP is the platform on which this treasure is landing and from which we start again with new vigor ".

At the final stage of Gelato Festival World Masters 2021 will participate 36 selected chefs around the world, so divided among the 5,000 gelato makers involved in the qualifications:

·       All Stars (Florence, September 2018) with the Gelato Festival winners from its birth until today

The final will take place in four years in one of the candidate cities to be examined by the organizers. The path of qualification of gelato makers will see a series of events, from over 100 selections in the Carpigiani dealers' premises named "Gelato Festival Challenge" (not open to the public) to the more than 50 stages of Gelato Festival around Europe and the United States, up to three "Carpigiani Day" that will be held at the Anzola Emilia headquarters between 2019 and 2020.

The calendar is made by other crucial events of qualification to the world final:

-       Carpigiani International Day – approved Event (2020) from which the German, Austrian, Polish and the rest of Europe will be released

The gelato makers of the other continents (China, Japan, Middle East, Rest of Asia, Australia and New Zealand, India, South America) will join the world final through the selections in the respective Countries organized within the Gelato Festival Challenge.

The great adventure of Gelato Festival World Masters 2021 which begins today with the presentation of the project will therefore come alive with the European edition that will start the weekend from 20th to 22th April in Florence, with the inaugural stage of Gelato Festival 2018. This will be followed by the appointments in Rome (28th April – 1st May), in Turin (5th-6th May) and in Milan (12th – 13th May), then the kermesse will move abroad with the stages in Berlin (26th – 27th May), Warsaw (9th – 10th June), London (23th – 24th June) and Wien (30th June – 1st July). The continental program will culminate with the All Star in Florence (14th – 16th September) before crossing the Atlantic for the American edition, articulated in 8 stages.

With the edition 2018, the Gelato Festival arrives at the ninth year of activity, having made its debut in Florence in 2010 inspired by the idea of ​​the first gelato recipe by the versatile architect Bernardo Buontalenti in 1559. Since then the event has expanded its borders first in the rest of Italy, then in Europe and - from 2017 - also in the United States, with a total of 64 festivals made, before embracing the whole planet with the world championship of Gelato Festival World Masters 2021.