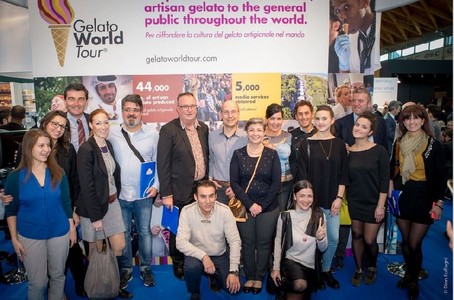 • First American stop in Chicago (May 27-29, 2016). Competition also open to gelato artisans from Central and South America;
• The application process for the Chicago stop will close on March 31, 2016;
• In Italy, a calendar of 18 stops throughout the peninsula for the Gelato World Tour Italian Challenge;
• At Sigep 2017, a competition reserved for German gelato artisans in collaboration with Uniteis.

Rimini, January 26, 2016 – After triumphant public response in Asia for the stages in Singapore and Tokyo in 2016, the Gelato World Tour now turns to the American continent with two stops in the United States, open also to artisans from Central and South America. The first is scheduled for May 27-29 in Chicago, a city which in recent years has become home to an emerging foodie scene. In September, the tour will continue on to the West Coast. 2016 will also see a busy calendar for the Gelato World Tour Italian Challenge, the traveling competition that will travel throughout Italy, stopping at Carpigiani dealers. The contestants will compete for eight finalist spots. At Sigep 2017, selections will be made for the German stage, which will be held in Germany during the summer of 2017. Hundreds of gelato artisans will challenge each other for the title of World’s Best Gelato. The grand finale of the second edition of the Gelato World Tour will be held in Rimini in September 2017.

The event, known as the “Formula One of Gelato,” is supported by the Italian Ministry of Foreign Affairs and Economic Development and by the Emilia-Romagna Region, and is the first international traveling competition searching for the best flavors in the world. It has already traveled to nine cities: Rome, Valencia, Melbourne, Dubai, Austin, Berlin, Rimini, Singapore, and Tokyo, organized by the prestigious Carpigiani Gelato University and Sigep – Rimini Fiera, for 37 years the most important trade show for traditional gelato and pastry. Making this event possible are the main partners: IFI, leading manufacturer of gelato display cases; and PreGel, the world’s largest producer of ingredients for gelato and pastry. Prodea Group is the event’s operating partner.

Some Gelato World Tour numbers from 2013 to today:

-  5,000 articles in the Italian and international press.

In 2014, the Gelato World Tour had thousands of gelato lovers lining up for three days during the stage in Austin, Texas. In 2016, it will conquer the hearts of the people of Chicago and the Midwest on May 27-29, 2016: 16 gelato artisans selected from the American continent will compete for the title of World’s Best Gelato – Americas East. In these delicious three days, visitors will be delighted by incredible gelato produced right in front of their eyes by expert artisans. Young apprentices will serve them, in a passionate challenge for the prestigious title.

The winning formula of Gelato World Tour remains unchanged: passion, artisanship, and lots of culture. The gelato artisans themselves will tell their stories and present their flavors to the public and jury of experts and journalists, whose votes will decide the final standings and the three finalists who will participate at the Grand Finale to be held in Rimini, Italy in 2017. Numerous activities based on artisanal gelato culture will accompany the challenge, like:

•    My first gelato shop! Training workshops designed for those wanting to open their own gelato shop, organized by Academia IFI.

•    Tonda Challenge by IFI, in which gelato artisans challenge each other to produce the perfect cup.

•    “Stack It High” Show Down by PreGel. How many scoops of gelato can fit on a cone?

Gelato World Tour Italian Challenge: a sweet journey through Italy with the top gelato artisans. After the success of the inaugural stage on November 25, 2015 held at the offices of Omab, Carpigiani’s dealer in Rome, the Gelato World Tour Italian Challenge has already scheduled other 18 stops for 2016, and still others are being organized. The objective is to select the Italian artisans who will represent Italy at the final of the second edition of the Gelato World Tour in 2017. The Italian Challenge is organized by Carpigiani, in collaboration with its dealer network and Sigep – Rimini Fiera and PuntoIT, to give Italian artisans the chance to compete for the title of World’s Best Gelato. Participating is easy: just contact your local Carpigiani dealer and sign up with your best flavor. During competition day artisans prepare their recipes in the production area provided by organizers, and later in the afternoon the gelato is tasted by a jury consisting of one representative from Sigep – Rimini Fiera, one from the trade magazine PuntoIT, and local journalists and chefs. The top two flavors of each stage will participate in the Italian final to be held on March 23-24, 2017 in Anzola Emilia at the Carpigiani Gelato University campus. Here the eight Italian participants will be chosen to compete in the Grand Finale of the Gelato World Tour.

The calendar listing the stages of the Gelato World Tour Italian Challenge, continually updated, is available at www.gelatoworldtour.com

Alexanderplatz hasn’t been the same since August 2014 when it hosted the Gelato World Tour. Historically, Germany is one of the countries where artisanal gelato is most appreciated, and the three days of competition sealed this affection with a record turnout and an enormous success in local and national media. For Sigep 2017, a preselection dedicated exclusively to German artisans is being organized in collaboration with Uniteis. The 10 finalists will gain access to the German stage scheduled for the summer of 2017. Rules and registration at the website www.gelatoworldtour.com