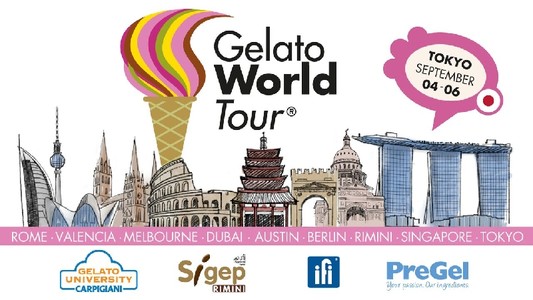 Finalists - from Japan, Taiwan (China) and South Korea - will compete against each other on September 4 - 6 at the Komazawa Olympic Park in Tokyo

Tokyo, 4 August 2015 – The ninth stop of Gelato World Tour (GWT) is about to land in Tokyo, which will become for three days, starting on 4 September, the new Gelato-Capital of the world. After the huge success achieved in Singapore last March, the “Formula One” of gelato will celebrate the beloved Italian iced treat surrounded by the innovative buildings of Komazawa Olympic Park. 16 selected gelato artisans of the Far East region, coming from Japan, Taiwan (China) and South Korea, will be competing for the prestigious “World’s Best Gelato – Far East Asia” title.

The Gelato World Tour, which has the patronage of the Italian Ministry of Foreign Affairs and of Economic Development, is the first international traveling competition in search of the best flavors in the world. GWT has already toured eight cities around the world – Rome, Valencia, Melbourne, Dubai, Austin, Berlin, Rimini and Singapore – and it is directed by the renowned Carpigiani Gelato University and Sigep – Rimini Expo, the most important trade fair in the world for the artisan creation of gelato, pastry, confectionery and bakery products. Three important partners make this event possible: IFI, international leader in the manufacturing of display cases for gelaterias; PreGel, the world’s largest producer of ingredients for gelato, pastry and coffee shops, official licensee of EXPO Milano 2015; and Rancilio Group, an Italian company with a long, distinguished tradition of producing professional coffee machines featuring well-advanced technology and design since 1927.
This new synergy between gelato and coffee, style icons and timeless Italian specialties, will take the tastiest culinary traditions of the “Bel Paese” on a journey to the Land of the Rising Sun. Last but not least, Prodea Group is the operating partner.

The top 16 gelato flavors of the Far East Asia region were chosen by a Selection Jury directed by Mr. Kato (President of the Japanese Association of Pastry Chefs). Mr. Sakai (President of the Japanese Association of Gelato) was the Vice-President and Mr. Mochizuki (Executive Chef of the Imperial Hotel, Tokyo) and Mr. Yanai (Gelato expert) were members of the jury.

The GWT Village will be located at Komazawa Olympic Park in Tokyo. Entry is FREE for all visitors. The program will include (on a first-come-first-served basis):

•    Mini Courses for adults and children by the gelato chefs of Carpigiani Gelato University on “What is Gelato?” Participants will also be the first to hear more details about the 4-week program that teaches participants on how they can become successful gelato entrepreneurs
•    How to open a gelato shop? Educational workshops by Academia IFI
•    Tonda Challenge by IFI @ PreGel tent
•    Stack it high show down by PreGel, how many scoops of gelato can fit into a cone
•    Discover the secrets of gelato “Always FrescoTM” with PreGel
•    A Journey into the World of Coffee! Mini Courses run by IIAC Japan and the famous Japanese barista Chihiro Yokoyama: adults and children will discover the ancient techniques of coffee-making with Rancilio Classe11 Xcelsius
•    Espresso Time! A selection of 6 Japanese roasters (Toho Food Service, Kotobukiya Coffee, Narita Coffee, UCC, Camel Coffee and Capital Coffee) will reveal their secrets during special workshops realized in the Rancilio Group area.

Visitors will vote for their favorite gelato flavor from the top 16 finalists with a Gelato Ticket, which can be received for free at the INFO POINT located in the Gelato World Tour Village (upon registration). Each ticket gives 6 tasting portions in cones of 40grams each. Every person can get maximum 1 ticket. The votes of the visitors and GWT’s Technical Jury will determine the top three flavors to represent the Far East Asia region at the Grand Finale of Gelato World Tour 2.0 to be held in Rimini, Italy in 2017.