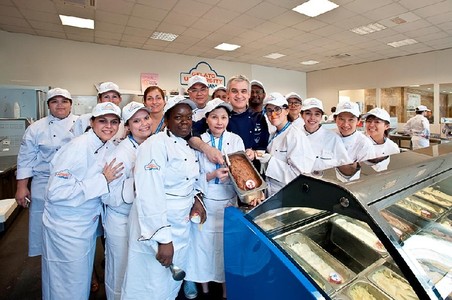 • Lots of new developments for the 2017/2018 school year including special events in collaboration with the world's best pastry chefs and gelato artisans: gelato for restaurants, aerography in the gelato shop, retail trends and much more.
• Results for the 2016/2017 school year: Over 7,000 students attending 400 courses at the 12 campuses of Carpigiani Gelato University throughout the world for 12,000 total hours of teaching.

9 October 2017 - The academic year that just finished at Carpigiani Gelato University was an unprecedented success: 400 courses, 7,000 students in 12 international campuses and 2 new campuses inaugurated, one in Zandhoven in Belgium and one in Vernon Hills, Chicago, USA. To celebrate these achievements Carpigiani Gelato University presented the new developments for the 2017/2018 school year, including the new calendar of "Special Events" in collaboration with the world's best pastry chefs and gelato artisans. Among the new courses, one dedicated to gelato for restaurant chefs designed for professionals who want to add a special touch to their menu with traditional and innovative recipes. Gelato for Milk Farm is a new course designed for farmers who want to produce artisan gelato with high quality milk. There will also be many appointments dedicated to pastry and gelato in collaboration with the Carpigiani Gelato Pastry University in Tokyo. Alessandro Racca, director of the Japanese school, will amaze participants with petit fours and small pastries. And don't miss new courses by pastry world champions like Francesco Boccia, Emmanuele Forcone and Fabrizio Donatone, who will demonstrate their decoration techniques and the production of unique desserts.

Returning are the gelato aerography course with Mario Romani and the chocolate working seminar with chocolatier Edouard Bechoux. For the third consecutive year, the school will also offer the "Sensory Analysis" course. In eight hours participants will learn how to become gelato tasters and to recognize the quality of a good artisanal product.

New dates will also be scheduled for courses for gelato professionals who want to differentiate themselves from the competition with recipes aimed at wellness. "Probiotic/Prebiotic and Low Calorie Gelato", where students will learn how to balance recipes to reduce calories by up to 30% while retaining flavor and consistency. "Functional Gelato: 100% plant based and Smart Food," developed in partnership with the European Institute of Oncology - IEO and aimed at identifying plant-based foods that promote health, educating consumers on healthy and preventive nutrition. "Low Glycemic Gelato," which changes the way gelato is made by proposing alternative production methods to reduce the glycemic index, allowing diabetics to enjoy a good gelato without worrying about their health.

Carpigiani Gelato University (www.gelatouniversity.com), founded in 2003 as the training division of the Carpigiani Group, is today recognized internationally as a breeding ground for successful gelato artisans. Its mission is to educate people about the culture of artisanal gelato. This year the school has organized more than 400 courses in 10 languages, for a total of more than 12,000 hours of instruction, statistics that have tripled over the past three years. The school’s main campus is in Anzola Emilia, Bologna (Italy), and training also takes place in other 11 satellite campuses around the world. Launched in September 2013, the Become a Gelatiere training program, distinguished by an increased number of hours dedicated to hands-on practice, has enjoyed a record number of registrations. An increasing number of students chooses to complete the full four-week program, which concludes with an internship in a gelato shop.