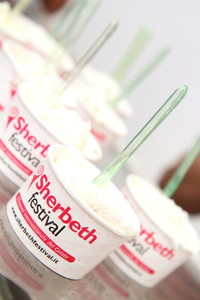 Gelato Boom in Sicily: over 180 gelato makers from all around the world have requested to join the fifth edition of the International Festival of Gelato in Cefal? (Palermo)!

In order to support them creating the ideal context of gelato-production, Carpigiani, sponsor, will set up the largest production lab ever realized in the Court of Stars of Cefalu.

On stage one of the most picturesque of Italy will be made available to the most innovative machines for the production of gelato: emulsifiers, pasteurizers and turbomixer Carpigiani signed, and also showcases the design, mega-screens, cameras and many other surprises.

In addition, each day all visitors can attend exclusive classes of Carpigiani Gelato University, who will transfer its main hall in the center of Cefalù to show the public how to pass "from fresh fruit to sherbeth" in gelato lab.

The School of Gelato most prestigious in the world, founded in 2003 in Anzola dell'Emilia (Bologna), will hold a mini-cycles continuous of 45-minute sessions designed specifically for the general public, in order to reveal to visitors Sherbeth Festival a few secrets of gelato at a time in which this food is the focus of international.


Admission is free: 80 participants per session with teachers in Italian and English, led by Roberto Fiorino, except for the Master of Carpigiani Gelato University, see revealed the ingredients that are inside the gelato, the properties of healthy and tasty sorbets, the origins and evolution of the "soft ice" and the basics of a balanced, freezing, pasteurization and storage of success.

Exceptionally, visitors can experience, under the supervision of the Masters of Carpigiani Gelato University, the real gelato machines used by subscribing to the practical session of the workshop on site.

Ready to join us? www.sherbethfestival.it