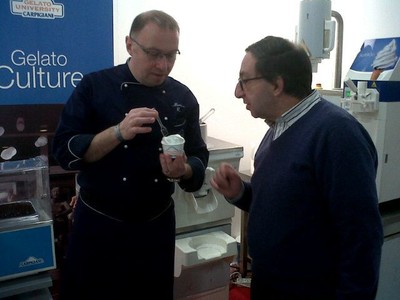 CARPIGIANI MAKES IT POSSIBLE FOR CHEFS AT IDENTITA? GOLOSE TO ADD GELATO TO THEIR MENUS, INSTANTLY!

Milan, February 2013 – Restaurants and gelato: two icons that well represent Italy throughout the world. At Identità Golose 2013, Carpigiani will make available to the event’s chefs the new Soft&Go, the machine that produces express gelato in an instant and in small quantities, adding taste and satisfaction to restaurant menus.


Soft&Go is perfect for reduced spaces without giving up on quality of a good gelato. Sleek and compact – it is less than 30 cm wide – this machine produces an excellent soft gelato. The chef can quickly add mix and clean the machine from the front. The cooling air is channeled upwards, so the machine can be positioned against a wall, further reducing its footprint. Soft&Go produces a soft, creamy gelato using a gear pump patented by Carpigiani which blends air into the gelato mix, ensuring continuous flow into the production cylinder and a product with high overrun. A steel beater with double spiral and idler spins inside the production cylinder to provide optimal mixing and freezing. Changing flavors is extremely simple thanks to the lower removable mix tank. Soft&Go can produce up to 200 70 gram servings per hour, and during off hours chefs can use it to prepare gelato treats that can be stored at -18° C for later use. Soft&Go is the ideal machine for those who want to offer high-quality taste all the way through to the end of the meal. Gelato is the sweetest memory, and when paired with other foods it can be a complete, rich component of any award-winning dish.


Alessandro Racca, an instructor from Carpigiani Gelato University, will demonstrate Soft&Go throughout Identità Golose in his presentation “Sweet and Savory Gelato” (every hour and as requested).


In 2003 Carpigiani Gelato University was established. Today it is the most important gelato school in the world, operating globally to train successful gelato entrepreneurs and spread Italian artisan gelato culture. The academic year 2011-2012 saw 590 courses taught in 10 languages, for a total of more than 15,000 class days.


The Carpigiani Gelato Museum was inaugurated in 2012. The museum is an important point of reference for the gelato business, giving it roots and underlining the value of the history of this high-quality food and the work of its artisans over the years. The museum features an interactive journey through the history of gelato, from its origins to today, focusing on three different areas: the evolution of gelato over time, the history of production technology, and the places and ways of consuming gelato. The 1,000 square meter Carpigiani Gelato Museum is home to more than 20 original machines, multimedia stations, and 10,000 photographs and historical documents. In addition, there are numerous tools and accessories from the past, along with video interviews and training areas. The visits to Carpigiani Gelato Museum can be enriched with delicious “Science and Nutrition Seminars” and “Gelato Emotions.”


The Gelato World Tour 2013-2014, the olympics of artisan gelato organized by Carpigiani Gelato University and SIGEP, will start on May 2013. It’s mission? Spread the culture of this fresh, high-quality food, which represents the excellence and creativity of thousands of gelato artisans, to the public throughout the world. Eight cities in the five continents will become gelato capitals. At each leg of the tour, 16 gelato artisans will be selected to create flavors that combine tradition and innovation, bringing out the flavor of the best ingredients. Entering the village of the Gelato World Tour, the public will participate in free courses held by instructors from Carpigiani Gelato University, will taste the gelato by purchasing the necessary coupons and an area dedicated to the Gelato Museum will offer the chance to learn more about gelato’s history. Experts and visitors together will judge the recipes, declaring a victor for each stage, who will then have the opportunity to compete at the Grand Finale in Rimini (September 2014) for the title of “World’s Best Gelatiere.”