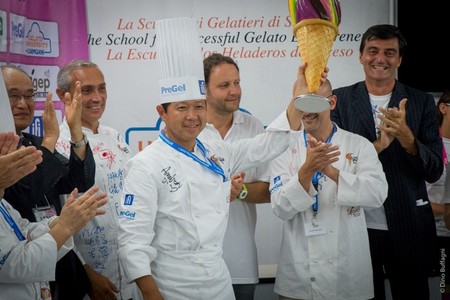 Tokyo, its citizens, residents and visitors showed how much they loved gelato over this weekend. Every day they came in hundreds since 2 hours prior to the opening of the Village and savored all 16 top flavors of the East Asia region. The Village of the Gelato World Tour at Komazawa Park is continuing to be packed to the brim every moment, even now that the competition has ended. Gelato Tickets sold out, 72.000 gelatos served to more than 55.000 visitors. The Tokyo stage of the Gelato World Tour has set new records! More than 5000 kilograms of gelato have been produced in front of the crowds at the Carpigiani Laboratory, the biggest ever created in Japan, thanks to the support of Sigep-Rimini Fiera. The gelatos have been displayed in the internationally awarded IFI cabinets. 3200 litres of milk, 700kgs of sugar, 400 litres of cream and 600 kilograms of PreGel ingredients have been utilized by the gelato artisans and more than 20.000 Espressos have been made with the Rancilio Classe11 Xcelsius.The Gelato World Tour, which has the patronage of the Italian Ministry of Foreign Affairs and of Economic Development, is the first international traveling competition in search of the best flavors in the world. Gelato World Tour has already toured eight Gelato Capitals – Rome, Valencia, Melbourne, Dubai, Austin, Berlin, Rimini and Singapore – and is directed by the renowned Carpigiani Gelato University and Sigep – Rimini Fiera, the most important trade fair in the world for the artisan creation of gelato, pastry, confectionery and bakery products. Three important partners make this event possible: IFI, international leader in the manufacturing of display cases for gelaterias; PreGel, the world’s largest producer of ingredients for gelato, pastry and coffee shops, official licensee of EXPO Milano 2015; and Rancilio Group, an Italian company with a long, distinguished tradition of producing professional coffee machines featuring well-advanced technology and design since 1927. This new synergy between gelato and coffee, style icons and timeless Italian specialties, will take the tastiest culinary traditions of the “Bel Paese” on a journey to the Land of the Rising Sun. Last but not least, Prodea Group is the operating partner.   Tens of thousands of visitors witnessed “The Jury Challenge” where the top 16 gelato artisans presented their signature flavors to the Technical Jury, composed as follows: the President was Makoto Kato, President of the Japanese Association of Pastry Chefs; the Vice Presidents were Misa Shigeki, Vice President of the Japanese Association of Gelato, and Kanjiro Mochizuki, Pastry Manager and Kitchen Vice Director at the Imperial Hotel Tokyo. Also in the jury: Rita Giuliana Mannella (Italian Embassy in Japan), Kouta Ueki (Onesto Srl President), Hideaki Nimura (Ice Cream Press), Hiroyuki Yamauchi (Ice Cream Distribution Journal Spa), Rio Hiraiwa (free-lance Journalist), Antonino Lentini (Ristorante da Nino), Masashi Yanai (FMI Team Consultant), and Veronica Tae-Ahn Kang (Adjunct Professor of Culinary & Food & Beverage Management, Sejong Cyber University - Korea).Visitors to the event were well rewarded for their support of Gelato World Tour with a playful moment when everyone gathered to cheer the Korean Seongdeok Park, Gelateria Dolcefreddo (Daegu, South Korea), winner of the “Tonda Challenge” by IFI (a battle to the last scoop between gelato artisans to prepare the perfect gelato cup of 60 grams). They also cheered for the Italian Andrea Bonaffini, Gelateria Yellow Lemon (Taipei, Taiwan), winner of the “Stack it High Showdown” by PreGel (Gelato Maestros’ competition to create the highest Gelato in the World) and Chihiro Yokoyama, of the International Institute of Coffee Tasters-Japan, winner of the special mention “Barista Champion” by Rancilio Group. The defining moment of Gelato World Tour Tokyo, however, was when the gelato artisans were rewarded for their dedication and hard work. The top three flavors announced were:

Special mention - People’s Choice goes to White Passion by Andrea Bonaffini, Yellow Lemon, Taipei, TaiwanSpecial mention - Maestri Gelatieri goes to Chocolate Banana & Nuts by Jun Tanaka & Shinzato Kaoru, Vito Atelier, Fukuoka, JapanThe Judge’s Special Mention goes to Amalfi Coconuts with Meringue by Munehisa Tomoyuki & Munehisa Tomoko, L’oiseau Bleu, Yamaguchi, Japan“Our 16 gelato artisans have delighted Tokyo with their wonderful creations. They were all unique, sumptuous and surprised even the most discerning palates. We are delighted with the choice of the visitors and the Technical Jury. We wish the top three flavors who will represent the East Asia region at the Grand Finale of the Gelato World Tour in Rimini, Italy in 2017, all the best,” said Achille Sassoli, Director of the Gelato World Tour. He added, “Tokyo’s excellence and creativity in the world of pastry, healthy lifestyle and artistic culture delivered on its promise as the perfect city for our second competition in Asia. We are extremely grateful for the warm welcome received and to the many visitors who embraced the delight of gelato and stayed to enjoy the fun-filled three days!”The next stages will be in USA, Brazil, China, UK, Germany and Italy.