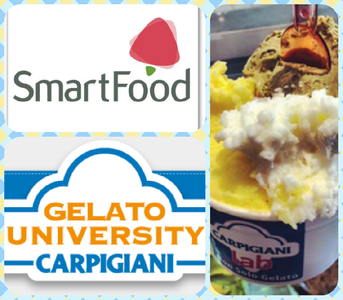 Bologna, 14 October 2013 – Everything is ready for the launch of “Gelato Smartfood”, a revolutionary course of artisan gelato developed in tandem by Carpigiani Gelato University and SmartFood (a project of the European Institute of Oncology –IEO- based in Milan). The objective is teaching to the gelato artisans to identify elements in plant-based foods that are beneficial to people’s health and educating consumers about healthy eating. Thanks to the idea of Donna Brown,  noted lifestyle designer, author, and foody, this course is becoming real and it puts a new frontier in the gelato sector’s story.


“The desire to eat better, with more healthy, preventive ingredients, has become a priority. My experience with CGU and IEO inspired me to develop exquisitely healthy gelato and sorbets: the ingredients are used in such a way as to reduce added sugars 30-60%. In addition, the ingredients of these new flavors actively work for our health. Gelato is a food with strong roots in Italian traditional cuisine. Instead of trying to convince people to do without some pleasure, it’s better to make it as healthy as possible. Flavor is a prerogative that cannot be denied.”


In recent years the demand for food with specific characteristics has become more frequent, both regarding ingredients and the nutritional value. But this doesn’t mean that you have to do without traditional flavors and goodness.

This need has inspired the development of a new course that reflects such modern trends that place eating and lifestyle at the heart of wellbeing, even in the gelato shop.


Carpigiani Gelato University crosses into the future for a real and primary necessity that consumers are requesting always more.


The course “SmartFood gelato” will provide the basic knowledge necessary to develop a selection of gelato flavors having specific healthy characteristics and certified by SmartFood, with special attention given to the nutritional quality of the ingredients and the production techniques. Operators will be able to offer customers a more healthy alternative from a nutritional point of view, at the same time maintaining a strong link to classic Italian tradition. The course will feature recipes developed by Donna Brown together with Gianpaolo Valli, senior instructor at Carpigiani Gelato University. The lessons will be taught by Gianpaolo Valli and Lucilla Titta, a nutritionist with the European Institute of Oncology.

“I’ve always been interested in nutrition. Developing this aspect of artisanal gelato is very exciting. Thanks to the revolutionary intuition of Donna Brown and the collaboration with IEO, at Carpigiani Gelato University we have been able to design for the first time in history a course that teaches how to develop an

artisanal gelato recipe that is delicious and … nutraceutical! This result confirms once again that gelato is a healthy food, capable of offering both moments of joy and at the same time nutrients that are necessary for good health.”


The two-day course will be held in both English and Italian at the main campus of Carpigiani Gelato University in Anzola Emilia (Bologna). It is designed for expert gelato artisans who want to widen the array of flavors they offer their customers, as well as for future artisans who want to learn more about revolutionary developments in the gelato business.


The scheduled dates are:

The course innovation affected not just the professional gelato artisans but also the teachers of Carpigiani Gelato University, that subscribed to the initiative with strong enthusiasm, making clear in this way its true and real value. At few days from the start, there are still some places available for the course, hurry up and do not miss this delicious and clever opportunity!

Born in Canada, resident in Italy, for more than 20 years she has dedicated herself to lifestyle. She has worked in many areas, from flower arranging to interior design, from landscapes to wellbeing. Her first love, however, is food. A passionate, self-taught cook, she has been inspired by cultures from all over the globe. She hosted a series of episodes for the program Christmas at the Brown’s House on Gambero Rosso Channel, has written books on decoration and cooking, and works with specialized publications. She is a regular on RAIDue’s Detto Fatto with Caterina Balivo, and is one of the columnists at the new RCS site dedicated to foodies, Leifoodie. Her first lifestyle book, Food & Flowers (Mondadori) was a great success and has been translated into four languages.


The collaboration with IEO (European Institute of Oncology) and training at Carpigiani Gelato University inspired her to develop a healthy, active gelato that maintains its delicious flavor, because gelato is primarily associated with fun, happiness and moments of sharing.

Experience and dedication of independent researchers are not enough to achieve high-quality research. What is needed is an entity that can guarantee the researchers the chance to work at increasingly higher levels. For this reason the European Institute of Oncology is paired with the IEO Foundation, a non-profit organization dedicated to seeking out funding. For IEO and its foundation, the battle against tumors takes three forms:

·         Experimental research is given first priority.

·         Training, to which is attributed maximum importance.

The certainty of being able to contribute to the fight against one of our age’s worst maladies, which thanks to research is no longer incurable, is a source of hope for all those people that every year are struck by cancer, 270,000 in Italy alone.

CARPIGIANI GELATO UNIVERSITY (www.gelatouniversity) is internationally recognized as a breeding ground for successful gelato entrepreneurs. Its mission is to teach quality artisanal gelato culture. Since its founding in 2003 it has practically tripled course registrations. In the 2012-2013 scholastic year it offered 600 courses in 10 languages worldwide, reaching more than 15,000 people. The main campus is located in Anzola Emilia (Bologna) and there are 12 satellite campuses located throughout the world. Starting in September 2013 and throughout the 2013-2014 academic year, the school will be offering the “Become a Gelato Artisan” training program, lasting four weeks and including a heavy concentration of hands-on practice.

For information and course registration: