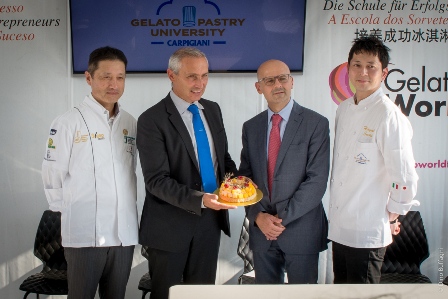 The innovative advanced training project has been presented today at the Gelato World Tour Village (Komazawa Park). The courses will start on November 26, 2015. Alessandro Racca, internationally renowned Italian Gelato and Pastry Chef and instructor at the Carpigiani Gelato University, will lead the teaching team

Tokyo, 4 September 2015 – Today the first Gelato Pastry University in the world has been presented to the media and to the public. The School, based in Tokyo, will offer a unique training program, with the mission to develop new ways to fuse traditional Italian gelato and high-level pastry. The first course will start on November 26, 2015.

Structured to perform as a laboratory of ideas focused on high quality, Gelato Pastry University will offer participants a high-level curriculum, employing part of Carpigiani Gelato University's world-renowned methods and objectives. The school has been designed to meet the needs of professionals looking to expand their training, with the aim of developing new and creative product lines. There will be five different types of courses, with a total of 4 difficulty levels. Each course will last from three to a maximum of six hours and will focus on several subjects such as: basic gelato making, gelato cakes, mignon pastry, pastry shop business and so on. The headquarters will be located at the Carpigiani Japan premises. Carpigiani has chosen Japan as it is a country where the art of pastry has reached the highest levels of perfection and innovation. The challenge is to develop a new segment of pastry that features the culture of artisan gelato.  Alessandro Racca – internationally renowned gelato and pastry chef who followed his parents’ footsteps and became the youngest winner of the “Gelato Gold Medal” in 1985 – will lead the teaching team. Shigekatsu Kimura and Hiroyuki Emori, among the most renowned Japanese pastry chefs, will be part of the talented group.

The official presentation to the press and professionals was held on September 4, 2015, at the Village of the Gelato World Tour at Komazawa Park. The event coincided with the East Asia stop of the "Formula One" of artisan gelato, which, for the first time, has landed in Tokyo, making the city the Gelato World Capital for three days. The sweetest, coolest event in the world – during which the best flavor in East Asia will be selected – is giving life to a new project providing new, stimulating challenges in the world of frozen desserts.

“The Japanese leg of the Gelato World Tour is an excellent opportunity to announce a new project full of challenges and interesting developments”, said Mr. Andrea Cocchi, Managing Director of Carpigiani Group. “We chose Tokyo as the headquarters of the school to stress out the fact that Japan is the most advanced country in the world, besides France, for the pastry field, and one of the most receptive towards innovation and fusion of different food cultures. The brand new Gelato Pastry University comes as a natural evolution of our mission in spreading the culture of gelato around the world, a step towards new paths by proposing a unique training program, whose mission is to combine thebest traditions of Italian gelato and Japanese pastry. We are confident that the Japanese chefs will be receptive in following us in this new challenge and we will be happy and proud to support them by providing high-quality courses. In our view, the next step would be making Japan become the international avant-garde of the gelato and pastry culture, gathering students from all over the world. We are ready for the start of a new Gelato Pastry era!”

“The courses of the Gelato Pastry University will be run by professional chefs who are already successfully involved in the gelato business”, says Mr Lorenzo Scrimizzi, President of Carpigiani Japan. “And this is very important because the objectives we want to achieve through this school are the following ones:  to create a laboratory of ideas, to propose various business models, to promote the use of professional equipment in the workshop as a tool to increase productivity, quality and safety of the final product”.

To know more
Carpigiani Gelato University, founded in 2003 as Carpigiani’s training division, is today recognized worldwide as a breeding ground for successful gelato entrepreneurs.  Its mission is to teach the culture of quality artisanal gelato. Complete training programs, combined with advanced teaching methods and a team of internationally renowned master gelato instructors, have brought the school great success, the number of participants growing exponentially over the past few years. Today it is leading a sweet cultural revolution across the five continents. The main campus is in Anzola Emilia (Bologna), and there are other 11 satellite campuses located across the globe: UK, USA, Argentina, Japan, China, Germany, Russia, France, Brazil, Dubai, and Singapore.

Carpigiani's presence in Japan dates back to 1980, when Carpigiani Japan was founded. Since then, the Japanese subsidiary has offered an intense training program based on CGU's methodologies, featuring around 30 seminars per year, reaching a total of 400 participants per year.