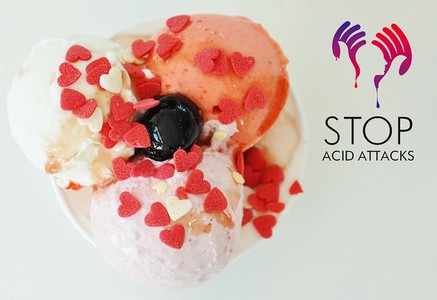 The Gelato World Tour Americas East stop (Millennium Park, Chicago, 27-29 May 2016) coincided with the start of the campaign to gather funds to open a gelato shop in Agra

Anzola Emilia (Bologna), Italy, 30 May 2016 – Each year in India, hundreds of persons, mostly women, are victims of acid attacks that, besides disfiguring them, marginalize them and do not leave space for returning to a normal life. Last weekend, in conjunction with the Gelato World Tour - Americas East stop (the “Formula One” of gelato that made Chicago the world capital of gelato for three days), the Bruto and Poerio Carpigiani Foundation has launched the “Gelato Smiling” fundraising campaign to support the international Stop Acid Attacks project and give some extra hope to survivors. The objective of this “sweet” crowdfunding campaign is to raise $40,000. These funds will be donated in their entirety to the opening of a gelato shop in Agra, in the state of Uttar Pradesh, within the Sheroes Hangout Café. This café is located near one of the world’s most famous tourist sites, the Taj Mahal. It is therefore a real business opportunity that will provide an opportunity for renewal to those who have survived acid attacks. The Bruto and Poerio Carpigiani Foundation will provide the necessary equipment and training for the people who work in the gelato shop.  Donating is easy: simply go to the Indiegogo platform by following this link: https://www.generosity.com/community-fundraising/gelato-smiling

Those who donate will be deliciously rewarded: thank you postcards from the president of the Bruto and Poerio Carpigiani Foundation, Romano Verardi; video thanks featuring the smiles of survivors; T-shirts from Carpigiani Gelato Museum; tasty gelato courses at Carpigiani Gelato University.

“This project fits perfectly with the values of the Bruto and Poerio Carpigiani Foundation,” notes President Romano Verardi. “Gelato Smiling honors the work of Bruto and Poerio Carpigiani, the two brothers from Bologna who spread artisanal gelato technology, business, and culture throughout the world. These visionary entrepreneurs taught us to believe in the strength of commitment and will, investing in innovation and the enormous potential of youth and their communities. Gelato Smiling gives us the chance to offer a concrete opportunity of renewal to victims of vile and brutal violence. We are grateful to those people who help us in this mission, as well as the other organizers of the Gelato World Tour who support us in this international operation.”