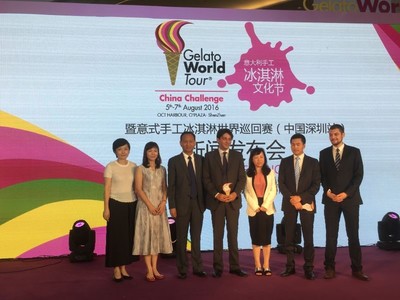 The event will take place in Shenzhen, August 5th-7th, 2016. Registration will close on July 15th

Shenzhen, China (June 27th, 2016) – The Gelato World Tour, the world's premiere cross-cultural artisanal gelato competition, has announced the China Challenge in Shenzhen OCT Mall on August 5th-7th, 2016, during the Italian Gelato Culture Festival organized by Shanghai Nina Food, Ci gusta “the Italian food experience” chain spread worldwide and with the partnership of Carpigiani Gelato University, Sigep Rimini Expo, PREGEL, ISA, OCT Mall, Haier. With free admission to the public, the tour’s first stop in China will present sixteen renowned gelato artisans from the Chinese region as they compete to create the world’s best gelato flavor.  Visitors and industry professionals are invited to enjoy lessons, hands-on workshops and delicious instruction on the ancient art of making gelato.
“A  quick  overview  of  international  markets  gives  us  a  better  idea  of  the  current  situation,”  says  Richard Xu, CEO Carpigiani China. “Per capita consumption of gelato in Italy grew from 7.6 kg in 1996 to 9.7 kg in 2015. While 18 years ago industrial ice cream and artisanal gelato split the market with  50%  each,  in  2015  artisanal  gelato’s  share  grew  to  66%.  But  today’s  challenge  is  primarily  an international  one.  While  Italy  has  40,000  gelato  shops,  Germany  9,000, North America, Asia, and Oceania lag far behind with 900 in the US, more than 1,000 in Japan, around 200 in Australia, 300 in the Middle East, and 500 more split between China and Southeast Asia. Not coincidentally, these are prime targets for stops of the Gelato World Tour.”

In  Italy,  the  sector  is  worth  2.7  billion  euros  –  two  million  in  cones,  cups,  and  trays;  300  million  in specialized machines manufactured by 15 companies totaling 450 employees, not to mention the 500 million of  sales  and  500  employees  producing  furnishings;  other  450  million  are  accounted  for  by  ingredient manufacturers,  numbering  80  brands  and  1,600  employees  –  and  providing  work  for  more  than  150,000 people.
The winning formula of Gelato World Tour incorporates passion, artisanship and culture. The gelato artisans themselves will tell their stories and present their flavors to the public, jury of experts and journalists, whose votes will decide the final standings and the three finalists who will participate at the Grand Finale in Rimini, Italy, in 2017. Numerous activities based on artisanal gelato culture will accompany the challenge.
Registration for Gelato World Tour China Challenge in Shenzhen will close on July 15th , 2016. The rules and registration form are available at http://www.gelatoworldtour.com/zh-hant/.

Because artisan gelato is made fresh daily with the highest quality ingredients, has less air than traditional ice cream and is served at a higher temperature, the flavors invigorate the palette while containing fewer calories and fat.  This makes gelato the right choice for health-conscious foodies who appreciate the finest flavors and textures.
Gelato World Tour has already traveled to nine cities: Rome, Valencia, Melbourne, Dubai, Austin, Berlin, Rimini, Singapore, Tokyo and Chicago. In 2016 the international competition launched three local events: Italian Challenge, German Challenge and China Challenge. Gelato World Tour China Challenge is organized by Shanghai Nina Food with the partnership of Ci gusta “the Italian food experience” chain and PreGel, the world’s largest producer of ingredients for gelato and pastry, as the main partner. The prestigious Carpigiani Gelato University and Sigep – Rimini Fiera, the most important trade show for traditional gelato and pastry, sponsor the event as well as ISA, leading manufacturer of gelato display cases, Haier, OCT Mall. The Italian Gelato Culture Festival has got the patronage of the Italian General Consulate of Canton and ICE.