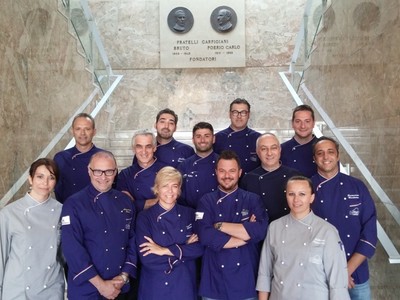 • 19 September 2015, Open Day: free courses (ending with tastings) to learn about all the new developments at the school's main campus in Anzola Emilia.
• Special opening of the Gelato Museum Carpigiani with free guided tours at 12:30 and 4:30.
• Results for the 2014-2015 school year: More than 7,000 students participated in 400 courses held at Carpigiani Gelato University's 12 campuses located worldwide, for a total of 12,000 hours.

16 September 2015 – The best way to start the new school year? Have a party! Carpigiani Gelato University decided to open the doors to its main campus in Anzola Emilia (via Emilia, 45) next Saturday, 19 September, inviting gelato lovers and artisans – both current and future – to an Open Day of free courses (reservation required: write to info@gelatouniversity.com, final tasting included). Starting at 11am, participants will attend special classes taught by instructors at the school, which has been training successful gelato entrepreneurs across the globe since 2003. The 2014-2015 academic year saw more than 7,000 students participate in 400 courses organized at the 12 Carpigiani Gelato University campuses situated worldwide, and registrations for the 2015-2016 school year are already numerous.
This initiative is part of the celebrations for the third anniversary of the Gelato Museum Carpigiani, which on 19 September will have a special opening with two free guided tours at 12:30pm and 4:30pm (reservation required at info@fondazionecarpigiani.it). In addition, at the Carpigiani Gelateria it will be possible to taste the flavor of the month: Peach Sorbet with amaretto crunch. The celebrations continue on 20 September at 3:30pm with a trip to the Museo della Civiltà Contadina di Bentivoglio for the first stop of “Museum Fruit”: a guided tour followed by the gathering of ancient varieties of fruit in the splendid orchard that will be showing the first colorful signs of autumn. Participants will enjoy gelato and sorbets made with this fruit, the flavor taking them back in time.
New Developments for the 2015-2016 School Year

During the Open Day, visitors will learn about new developments for the 2015-2016 school year, including the second season of online webinars (in Italian and English) focused on recipes and their preparation. New this year is a course on Sensory Analysis, eight hours of learning how to become gelato tasters and to recognize artisanal product quality (scheduled for 6 February 2016). The “Become a Gelatiere” program, which makes it possible to learn everything you need to know to become a gelato entrepreneur in just four weeks, will start using a new set of recipes having a more international appeal, based on the experiences of the winners of the Gelato World Tour - the first traveling international gelato competition that has been seeking out the World’s Best Gelato since 2013, based on the preferences of the voting public.

More attention will also be given to the business side of the gelato equation. During the 2015-2016 academic year future gelato entrepreneurs will be able to learn about Gelato Store Management thanks to a course that combines artistic competence, communication and sales point marketing in collaboration with the consulting firm Kikilab.

New dates also for the courses dedicated to gelato professionals, designed specifically for those who want to differentiate their product with recipes focused on wellness. These include the Gelato Smart Food course (23-24 November 2015), offered in collaboration with Smart Food, a cutting-edge project of the European Oncology Institute that identifies compositions in food made with plants that are beneficial to health, and teaches how to educate consumers about healthy and preventive eating. The Low Glycemic Index Gelato course (25-26 November 2015) demonstrates that gelato does not necessarily require large quantities of sugar, offering alternative production methods to lower gelato’s glycemic index, making it possible for diabetics to enjoy gelato without worrying about their health.

Carpigiani Gelato University, founded in 2003 as the educational division of the Carpigiani Group, is today recognized internationally as the breeding ground for successful gelato entrepreneurs. Its mission is to teach artisanal gelato culture. This year saw more than 400 courses in 10 languages for more than 12,000 hours of coursework, results that have practically tripled in three years. The school’s main campus is located in Anzola Emilia (Bologna) and 11 other satellite campuses are situated worldwide. The Become a Gelatiere track was introduced in September 2013, featuring a higher concentration of hands-on training. Registrations for this course continue to break records as more students choose to participate in four full weeks of training, ending with an internship in a gelato shop