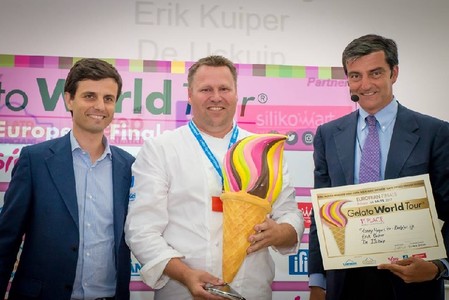 • The flavors "Honey-Yogurt Ice with Raspberry and Walnuts - Kui(p)er ijs" by Erik Kuiper, De Ijskuip gelato shop (The Netherlands), "My Chocolate" by Renáta Somogyi, Bringatanya Fagyizó gelato shop (Hungary) and "Salted Caramel Peanuts" by Dimitris Charalampous, Palladion gelato shop (Greece) will compete in the world finals of the Gelato World Tour on 8-10 September 2017 in Rimini, Italy with other gelato artisans from all over the world
• 8 special mentions to gelato chefs from Slovenia, Croatia, Belgium, The Netherlands, Czech Republic, Hungary and Poland

Anzola dell’Emilia, 26 July 2017 – The Awards Ceremony of the European Finals of the Gelato World Tour, held at the campus of the Carpigiani Gelato University in Bologna, finalize the list of the top 36 flavors that will compete for the title “World’s Best Gelato” in Rimini, Italy, on September 2017. Gelato World Tour, the “Formula One of Gelato”, is finally reaching the end of its second edition after the successful stages around the world that involved more than 2,000 gelato artisans from all over the world since 2015. The World Finals will be held in Rimini, Italy, on 8-10 September on the wonderful seafront beloved by Federico Fellini.

The three winning flavors of the European Finals officially gain access to the World Finals of Gelato World Tour thus joining the 8 winners of the Italian Challenge and the 4 winners of the German Challenge. 15 gelato chefs will therefore represent Europe. Below are the July 25 winners:

· 1st place: “Honey-Yogurt Ice with Raspberry and Walnuts - Kui(p)er ijs” by Erik Kuiper from De Ijskuip gelato shop (Denekamp, The Netherlands). Yogurt Gelato made with milk from De Ijskuip’s own Jersey cows, combined with a flavor of spring honey from a professional Beekeeper. The flavor has been variegated with Raspberries coming from their neighbor Krabbe’s farm and pieces of walnuts from De Ijskuip’s garden, in a homemade honey/sugar marinade.

· 2nd place: “My Chocolate” by Renáta Somogyi from Bringatanya Fagyizó gelato shop (Gyenesdiás, Hungary). A unique sweet and sour gelato made by a “lady” gelato chef. A 70% saothomé dark chocolate, which originates from specific region in Africa, and a South-American passion fruit perfectly balance the senses. The crispy crêpe flakes and the homemade chocolate sauce produce a complete party of tastes.

· 3rd place: “Salted Caramel Peanuts” by Dimitris Charalampous from Palladion gelato shop (Rhodes, Greece). Main ingredients, fresh milk and the finest Greek peanuts which the gelato chef melt together with soft salted caramel. He also variegated it with smashed peanuts and milk chocolate. The balance between the chosen ingredients and the high quality of the raw materials gives this recipe a unique, excellent taste.

During the two days of the European Finals, the 20 gelato artisans also competed in the famous “Tonda Challenge by IFI”. Winner of the competition, that aims to create the perfect gelato cup (60grams), has been Moreno Faganello from Sani Authentic Italian Gelato in Praha (CZECH REPUBLIC), who set a new all-time record by making two perfect gelato cups (60 grams each) consecutively.

Gelato World Tour is supported by the Italian Ministry of Foreign Affairs and Economic Development and by the Emilia Romagna Region. It is the first traveling international competition focused on identifying the best flavors in the world. It has already made stops in 11 cities in the world: Rome, Valencia, Melbourne, Dubai, Austin, Berlin, Rimini, Singapore, Tokyo, Chicago, and Shenzhen. It is organized by the prestigious Carpigiani Gelato University, the most famous school for the successful gelato chefs and Sigep - Italian Exhibition Group, for 38 years the most important fair in the gelato and traditional pastry trade.  Main partners of the European Challenge are IFI, global leader in the production of gelato display cases, and Silikomart, an Italian company specialized in the production of silicone molds and tools for pastry, baking and gelato making at international level.

- 8,000 articles in the Italian and international press.