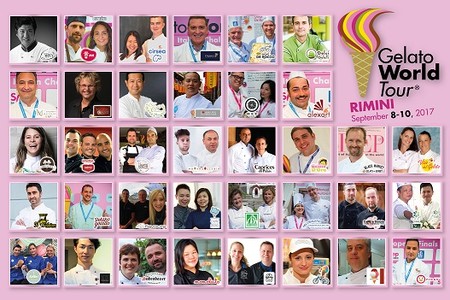 (Rimini, Italy, 8-10 September)
• 36 finalists from 4 continents and 19 different countries after 3 years of selections and more than 1800 participants;
• 3 days dedicated to the artisanal gelato at Parco Fellini to announce the "World's Best Gelato Flavor"

Rimini, August 2 2017 – After having conquered the taste buds of hundreds of thousands of people with 82 events in 19 different countries, Gelato World Tour is ready to welcome all the gelato lovers in Rimini for the second edition of the World Finals that will be held in Parco Federico Fellini, September 8-10. The Gelato World Tour village will take place near the famous beaches of the Emilia-Romagna Riviera and  in front of the iconic Grand Hotel as made famous from its role in the cinematic masterpiece “Amarcord” by director Federico Fellini, a native of Rimini. The itinerant competition, nicknamed “Formula One of Gelato”, has been looking for the “World’s Best Flavor” since 2015 and is bringing to Rimini the 36 finalists which have passed the selections around the world. Rimini will become the World Capital of Gelato for three days and the public will taste the flavors in the competition and can vote for their favorite one. The results of this public jury will be combined with the votes from the technical jury, composed of journalists and gelato experts, which will meet on September 10th in a professional and tasty atmosphere. The first edition opened in Rome in 2013 and finished in Rimini in September 2014, counting with the winners “Mandorla Affogato” by Sam & John Crawl from the “Cow and the Moon” gelato shop in Sydney, Australia.

Gelato fans are anxiously waiting for the results of this second edition more than ever, because the gelato artisans involved come from every corner of the world and there are 50% more flavors to try than the first edition.

The Gelato World Tour village will host also plenty of activities dedicated to gastronomy and to “Made in Italy” products, which will fill the program for a foodie public of all ages.

The 36 flavors in the competition from 19 countries are:

AUSTRALIA – “Gorgonzola & Pear Variegate with Figs and Walnut” by Michael, Brian & Teresa O’Donnell from 48 Flavors in Adelaide, The perfect balance of classic Italian flavors: Gorgonzola dolce made from pasteurized cow’s milk aged for 3 months, mixed with pear and finished with walnuts and organic figs.

MALAYSIA – “Vanilla of the East” by Keewin & Seow Huan Ong from Cielo Dolci in Kuala Lumpur, Pandan gelato accentuated with Tahitian vanilla beans, topped with hazelnut crumbs caramelized in coconut caramel and finished with a drizzle of Melaka Sugar.

JAPAN – “Delizia al limone” by Yoshifumi Arita from Arita 有 限 会 社   お 菓 子 の 店 ア リ タ in Nagasaki, flavor inspired by the traditional Italian dessert named “Delizia al Limone” of the Amalfi coast, which I had the pleasure to taste during a trip to Sorrento.

COLOMBIA – “Amor-acuyà” by Daniela Lince Ledesma from Amor-acuyà in Medellín, This exotic gelato combines three different sensations: passion fruit with its sour and sweet taste, which binds perfectly with the cream, a homemade passion fruit variegate to enhance aroma, and a 65% Colombian chocolate.

USA – “Saffron Pistachio with Candied Lemon Peel Gelato” by Gianluigi Dellaccio from Dolci Gelati Cafè in Washington DC, The saffron pistachio with candied lemon peel starts in infusing the saffron overnight in the Fior di Latte base. After, we combine the pistachio Anatolia to flavor the gelato base and then, at the extraction, we add the homemade candied lemon peel.

USA – “Bacche di Marsala” by Kelly Chu & Doran Matthew Cook from Cirsea in Charleston, A gelato of distinct blend of honey and Marsala Wine, accented of a blend of lemon and Goat Cheese, infused with swirls of Berry jam and Cookie.

CHINA – “Chinese Tea Gelato” by He Quingxia & Xu Dianmond from Ci Gusta! in Shenzhen, a Gelato combination of Jasmine and Liupao tea.

CHINA – “Love of Rose” by Guo Hongwu from Ami Gelato in Zhangzhou, a Rose, Sea salt and cheese Gelato, dedicated to his beloved wife, who was passionate about Gelato.

ITALY – “Pistacchio” by Alessandro Crispini from Gelateria Crispini in Spoleto (PG), a classic flavor from one of the most historic gelaterias in the region of Umbria.

ITALY – "Pistacchio" by Bruno Di Maria from Ristorante Madison in Realmonte (AG), an organicpistachio flavor with a hint of salt for the Sicilian gelato artisan.

ITALY – “Sapore d’Amatrice” by Daniele Mosca from Il Gelatiere di Amatrice (RI), a ricotta cheese gelato with chestnut honey and nuts, products of the land he was forced to abandon. He unfortunately lost his Gelateria after the disastrous earthquake that struck Amatrice in 2016.

ITALY – “The Soul of Alto Adige” by Elisabeth & Alexander Stolz from Osteria contadina Hubenbauer in Varna (BZ), a sorbet using ingredients produced by the Stolz family with a base of Tyrolean organic apples and flavored with crispy Schüttelbrot bread and Speck salumi.

BRAZIL – “Grandiflorum” Filipe Carniel & Mary Cellura from MU Gelato Shop in Florianapolis, Fondant cupulate (Chocolate made with the roasted beans of cupuaçu) combined with another sorbet of Capuaçu’s pulp.

AUSTRIA – “Queen of Summer" by Katarina Rankovic, Manuela Strabler & Linda Peterlunger from Eismanufaktur Kolibrì in Wolfurt, Natural, fresh and light homemade gelato with fresh yogurt and lime juice, it has a light hint of organic lime zest and fresh organic mint from our garden. This artisan flavor of lime, mint and blackberry creates a unique taste experience where the ingredients are the star.

GERMANY – "Tribute to Venice" by Guido & Luca De Rocco from Eiscafé De Rocco in Schwabach, “Uva-Fragola” grape sorbet with Zoldani “caramei.” The sorbetto base is made with “Uva-Fragola,” or strawberry grape, from the countryside near Venice, and the “caramei” are a typical candied walnut, a recipe that follows a traditional Zoldani art. GERMANY – “Golden Almonds” by Ezio Piccin & Fabio Cividino from Caffè & Gelato in Berlin, Almond gelato flavored with orange peel, together with a Dulce de Leche cream made with a hint of Himalayan salt that is mixed throughout along with caramelized peanuts and Dacquoise meringue pieces.

GERMANY – “Kiepenkerl” by Aurora Perenzin & Manuel Rütter from Eiscafè Arcobaleno in Stadtlohn, A Viennese almond gelato with a fine note of cinnamon and vanilla, marbled with a raspberry cream and topped with crunchy caramelized and chocolate-covered sunflower seeds.

THE NETHERLANDS - “Honey-Yogurt Ice with Raspberry and Walnuts - Kui(p)er ijs” by Erik & Hermien Kuiper from De Ijskuip in Denekamp, Yogurt Gelato made with milk from De Ijskuip own Jersey cows, combined with a flavor of spring honey from a professional Beekeeper. The flavor has been variegated with Raspberries coming from their neighbor farmer Krabbe and pieces of walnuts from De Ijskuip’s garden, in a homemade honey/sugar marinade.

HUNGARY – “My Chocolate” by Renáta Somogyi from Bringatanya Fagyizó in Gyenesdiás, In this unique gelato both the sweet and sour flavor dominate. The 70% saothomé dark chocolate, which originates from specific region in Africa, and the South-American passion fruit make the balance between the senses. The crispy crépe flakes and the homemade chocolate sauce produce a complete flavor party.

GREECE – “Salted Caramel Peanuts” by Dimitris Charalampous from Palladion in Rhodes, For this flavor, we use fresh milk, the finest Greek peanuts which we melt together with soft salted caramel. We also variegate with smashed peanuts and milk chocolate. The balance of the chosen ingredients and the high quality of the raw materials, give this recipe a unique, excellent flavor.

SLOVENIA – “Dark Smoke” Ardit Ejupi from Sladoledarna Pingo in Šentilj, A dark chocolate gelato made with chocolate that has been smoked with cherry wood and flavored with bourbon whiskey. The flavor reminds you of the Tennessee Whiskey wood barrels.